Welcome to Day 1 of the Decades Blogathon – ‘7’ edition – hosted by myself and Tom from the brilliant blog Thomas J! The blogathon focuses on movies that were released in the seventh year of the decade. Tom and I are running a different entry each day (we’ll also reblog the other’s post) and for today I’m very pleased to welcome Gill from Realweegiemidget Reviews, who is covering 2007’s British black comedy Death At A Funeral.

After a tip off from a good friend and blogger I heard the Decades Blogathon was looking for posts for its yearly extravaganza. Being late to joining last year, with my review of About Last Night (1986), I was keen to join this year’s fun. I requested to do this movie, a dark British comedy with a favourite TV actress Keeley Hawes from Ashes To Ashes (2008-10). I envied Hawes for her ‘will they wont they’ romance with Gene Hunt in the show and played to full manly manliness with the lovely Philip Glenister. He had me at his sheer masterful presence and Manchester accent. Anyway, so happy to have been selected by the guys to join this year’s blogathon and onto my review… 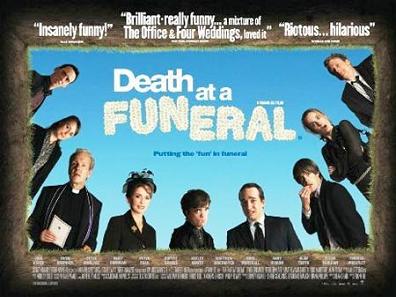 Part farce, mostly black comedy, I’d spotted this film in the Netflix list for British comedy films and had made a mental note to watch it. All I knew that it starred the lovely Keeley Hawes, who played Alex Drake in my time travel TV series favourite with Philip Glenister, Ashes To Ashes (2008-10). In what could possibly be described as a Richard Curtis dream cast, Hawes acts alongside what seems like a zillion British cast members including Hawes’ real life husband, actor Matthew MacFadyen. Support also comes from Ewen Bremner, Kris Marshall and Rupert Graves. And that’s just some of the Brits. Add two Americans Peter Dinklage and Alan Tudyk – leading to the first surprising revelation of this film as Tudyk adopts a perfectly convincing English accent – and that’s just a fraction of this ensemble.

Death At A Funeral (2007) tells about mild-mannered Daniel Howells, who is organising his father’s funeral in his nice, ancestral, family country home. You can tell this film is going to be seriously dark from the outset, as the wrong coffin is brought to the Howells’ ancestral home. After Daniel doesn’t recognise the body, the coffin is hastily replaced with the right one. Daniel and his apparently oft nagging wife Jane (Hawes) are planning on moving out, and have made plans to get an apartment of their own, leaving his widowed mother for a space of their own. They are awaiting money to put towards this venture from Robert, Daniel’s famous writer brother who is flying over for the funeral from the States. We meet the other family members as they drive to the funeral.

In no particular order, there is Daniel’s renowned, successful writer brother Robert, a long-haired (on first impressions it’s a case of really what were you thinking?) Rupert Graves. We are introduced to the brothers’ cousins on first appearances, loud but loyal, Martha (Daisy Donovan) and pharmaceutical student Troy (Kris Marshall); and Martha’s sensible boyfriend, Simon (Alan Tudyk) and old Uncle Alfie played by Peter Vaughan. Still with me? Also, we meet another cousin, Howard (Andy Nyman) and his friend Justin (Ewen Bremner). At the funeral, we meet Daniel and Robert’s mother Sandra, (Jane Asher) and the father to Martha and Troy, Uncle Victor (Peter Egan). And that covers almost everybody that you need to know about right now.

Now I’ll move on… but please use the last paragraph if you are easily confused. So en route to the funeral, Martha and Simon pick up Troy. Troy’s just been talking with a friend about a wonder drug he’s invented which can result in hallucinations… pharmaceutical student, really? Anyway Troy hastily puts some in an empty bottle labelled Diazepam – an anxiety reliever – which leads us to the most crucial part of this storyline. See where I’m heading? Simon is desperately nervous about meeting their father as the couple are wanting to impress him. So Martha gives Simon what she thinks is Diazepam. Oblivious to this, Troy puts the tablet bottle in his pocket before the three head to the funeral. 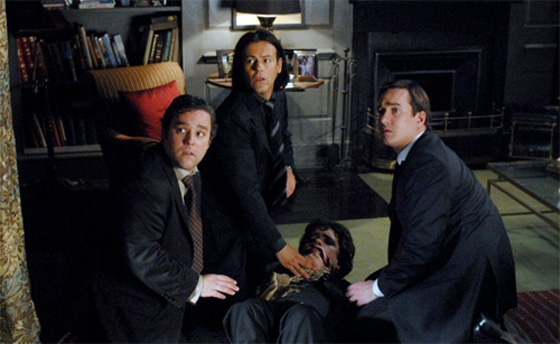 Howard, meanwhile, is revealed to be a bit of a hypochondriac with Justin pestering him with twenty questions centering around Martha, an apparent object of his affections. They pick up cantankerous Uncle Alfie in his wheelchair. Meanwhile at the funeral, Daniel is unsure about his eulogy, leading to an ongoing gag where all of the attendees ask him hopefully if his talented writer brother will be providing this. Including his mother. And the country vicar. Which doesn’t do his morale much good as he’s a struggling writer. His brother, meanwhile, has confessed he’s broke, using the last of his money on a first class plane fare over. Simon starts feeling the effects of this drug on the way seeing everything in a vivid green and hallucinating at the most inappropriate times. Martha tells Troy, who confesses all her, finding he’s dropped the pill bottle. Also at the funeral, we meet Peter (Peter Dinklage), a mysterious attendee who has a secret which he reveals to Daniel. Peter claims Daniel’s father wasn’t the happily married family man he appeared to be; and after showing Daniel evidence around this, he asks for money from Daniel to ensure his silence.

As you will find from watching more of this witty, farcical movie, our first impressions of this apparently normal British family aren’t true. Each has their own little eccentricities and backstory too. With every revelation or confession, each family encounter and full-blown disaster, it becomes more and more darkly fun to watch. Many of the family’s foibles and tales are linked together, with more complications added as the film progresses than your average episode of your favourite soap with just as many characters. So if you must go for a pee, press pause! 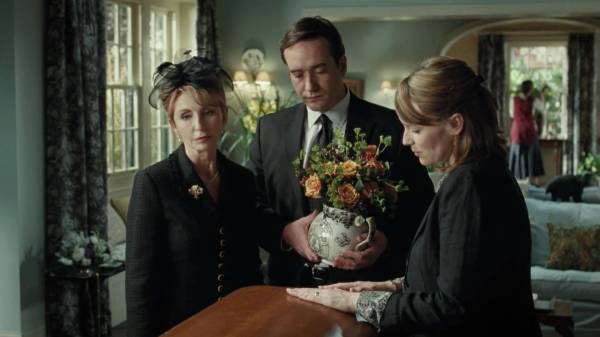 The parts are delightfully played and special mention has to go to MacFadyen who convinced me as the man forever in the shadow of his more successful brother. I could feel his frustration, and felt for him with his later outbursts to a well-meaning – not nagging – wife, Jane. Hawes played her supportive wife role so well, as her apparently nagging scenes at the start with her on-off-screen husband took a new meaning. Looking into her eyes you could see her love, concern and well-meaning. Graves, as the caddish brother suited this part well, with his foppish hair now adding to his roguish charm, in the sort of role you’d expect a post-Daniel Cleaver Hugh Grant to play. But to me, Graves will always be Freddy – Helena Bonham Carter as Lucy Honeychurch’s kid brother – in A Room With A View (1985) and 80s crush. Kris Marshall played the hapless, hopeless role he’s loved for which was probably the least surprise in this movie (unless you’ve never seen Love Actually (2003) or My Family (2000-11)). As for Dinklage, he was so fantastic in his wee role that his part was rewritten specifically for him after his successful audition. In fact, he even returned to the part in the remake, released a mere three years later in the same role but under a different name. The remake, also named Death At A Funeral (2010) boasts an all-American cast including Zoe Saldana, Chris Rock and Danny Glover.

All in all this was a watchable film, despite its macabre type setting and gags. It reminded me of The Big Chill (1983), a film with another fantastic ensemble cast – which included Kevin Kline, Glenn Close, Tom Berenger, William Hurt and Jeff Goldblum – also centering around a funeral.  Where The Big Chill had more one liners, this film has more farcical moments to it. The Big Chill has many of my favourite lines in movies, provided by Kline and the cast and a full review may come soon. Kline has a bizarre connection to the British Death Of A Funeral film, he starred in a film In & Out (1997) which shared the same director as this film, Frank Oz. Oz also starred in The Muppet Show (1976-81) and is more renowned as the voice of Yoda in the Star Wars films. So, as my final recommendation, to paraphrase Yoda “Do watch, or do watch not, there is no try” and to paraphrase two of his more famous lines: “May the Force humour be with you”  as “The Dark Side humour I sense in you”.