The leap forward taken by the DC Extended Universe courtesy of this summer’s refreshingly charming Wonder Woman has sadly U-turned faster than a speeding bullet.

While Marvel hasn’t perfected the superhero genre, with often underwhelming villains and a penchant for slam-bang finales that can feel overly familiar, it does boast a well-drawn gallery of central and supporting characters and plenty of crisp dialogue.

By playing the long game, it has also taken the time to enable audiences to grow comfortable with its slate of superheroes before throwing them together in a giant Marvel mash-up.

In a desperate effort to play catch up, the DCEU has, on the other hand, relied upon moviegoers’ love of Batman, Superman and, most recently, Wonder Woman to quickly sell them on the idea of a team-up involving several characters who, hitherto had only received a fleeting glimpse via Lex Luthor’s laptop in Batman vs Superman: Dawn Of Justice.

With this in mind, it’s perhaps unsurprising that Justice League hasn’t entirely lit up the box office, while one would hope the muddled and deeply uncertain tone of the movie should provide definitive proof to Warner Bros that the direction the franchise is being taken on by Zack Snyder simply isn’t working.

The post-Batman vs Superman studio panic was evident in the lamentable Suicide Squad, which tried to crowbar humour in to what had obviously started out as a Snyder-aping ‘dark and gritty’ action-fest.

The same can no doubt be said for Justice League. The insistence by cast and crew that this was always going to be a far lighter affair than Batman vs Superman smacks of “the lady doth protest too much”. Besides, what jocularity there is falls mostly into the lap of Ezra Miller’s Barry Allen, who rattles off lines as fast as his Flash alter-ego can handle, leaving the audience as little time as possible to absorb the fact that 99% of them simply aren’t amusing.

Jason Momoa may look the part as Arthur Curry/Aquaman, but he’s reduced to doing little more than grunting and being flung around the place (one confrontation with a phalanx of baddies is lifted straight from The Return Of The King). The prospects for a standalone movie doesn’t look promising.

One character who would benefit from more screen time is Ray Fisher’s Cyborg (aka Victor Stone), easily the most compelling of the new characters. With a tragic back story that piques the interest, Fisher sells Victor’s frustration and sadness, as well as his desire to do something good.

Of the returning comic book comrades, Gal Gadot’s Wonder Woman once again stands head and shoulders above the rest, having become DCEU’s golden girl following the huge critical and commercial success of her debut solo outing this summer. 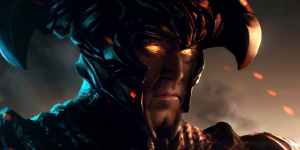 Wonder Woman‘s focus on luminous positivity in the face of the great darkness of World War One, as well as the ease in which its central team play off each other stands out even more when its lead character stars in something as flat-footed as this. It’s also fair to say that film’s director Patty Jenkins wouldn’t have focused her camera on the parts of Gadot’s body Snyder regualrly chooses to stray on.

Ben Affleck, meanwhile, looks like a man who’s realised he’s sleepwalked in to another Pearl Harbor as he leads the league in the wake of Superman’s (Henry Cavill) death against a nondescript CGI villain called Steppenwolf who, surprise, is hell-bent on conquering the Earth.

The wildly unbalanced tone of the film can perhaps be explained by the fact that Snyder stepped away towards the end of filming and handed the reigns to Avengers head honcho Jos Whedon following a family tragedy. However, one suspects Whedon didn’t contribute as much as some may suggest, meaning the blame for Justice League‘s shortcomings must ultimately fall upon its original director.

The path ahead for the DCEU is therefore clear – a fresh vision is needed in order for this particular universe to avoid imploding in on itself.