Thought Winston Churchill was behind the greatest gamble of the Second World War? Think again, according to this latest film centred on the iconic British leader.

Much like Shakespeare’s King Lear, the role of Churchill is a coveted one among thesps of a certain age and has been attempted more than a few times over the years on big and small screen alke.

Gary Oldman will be the latest to give the ‘victory’ sign when he stars in Joe Wright’s Darkest Hour later this year, but getting there first is Brian Cox, who gained considerable weight and shaved his head to achieve the physical embodiment of the former British Prime Minister. However, it is the way he humanises a man still regarded as one of the United Kingdom’s greatest figures that has won him particular acclaim.

Cox has spoken of the Shakespearean element to playing Churchill, and this is no more personified than in the Bard’s Lear, the great leader who is gradually sidelined whilst howling against a storm he no longer has control over. 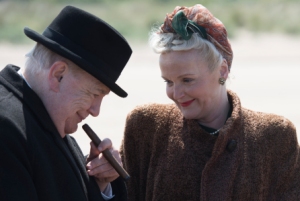 Set in the final days and hours leading up to Operation Overlord, otherwise known as D-Day on 6 June 1944, the film portrays Churchill as a man haunted by the slaughter that claimed the lives of tens of thousands of men at Gallipoli almost 30 years earlier and convinced the Allied invasion of France will be equally catastrophic.

His reduced status as little more than a figurehead is a bitter pill to swallow for Churchill, whose tirades and self-pitying fail to impress his devoted, but increasingly frustrated wife Clemmie (Miranda Richardson), while even his trusted friend King George VI (James Purefoy) must talk him out of a misguided plan to be at the frontline of the Normandy landings.

There’s no doubt the angle taken by the film in chronicling the lead-up to one of the defining events of the 20th century is an interesting one, based as it is on the diaries of Brooke as well as other historical sources. It’s a shame therefore that Alex von Tunzelmann’s one-note script and Jonathan Teplitzky’s stagy direction fail to get away from the fact that Churchill would have worked better on television rather than in cinemas.

In case we hadn’t absorbed the message that the Prime Minister was against Overlord, the film, like a broken record, continuously has Churchill imploring Eisenhower, Montgomery and anyone else who’ll listen not to “make the same mistakes as before”. Cox raises his game to play a role he’s reportedly wished to portray for years, while Richardson is equally fantastic (the supporting cast do their best with limited material); however, neither are served by a script that stretches itself to breaking point to fill 90 minutes. 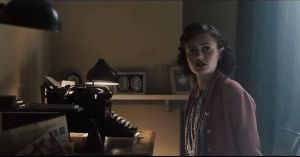 There are some nice moments here and there; in particular a beautifully played scene between Cox and Purefoy in which the King gently breaks his friend’s heart in an effort to save Churchill from himself. The crushing weight on the shoulders of Einsenhower and his senior military staff as they weigh up a decision that will ultimately decide the fate of the war is also effectively handled – lest we forget that D-Day was a leap into the unknown with potentially devastating consequences.

Excellent performances, however, cannot ultimately save Churchill from being an also ran in the long history of films involving one of history’s Great Britons.