It’s the penultimate day of the Decades Blogathon – 6 edition – hosted by myself and Tom from Digital Shortbread! I’ll say it again, make sure to check out Tom’s blog; it’s the best you’ll find around these parts. The blogathon focuses on movies that were released in the sixth year of the decade. Tom and I are running a different entry each day (we’ll also reblog the other’s post) and it’s time to welcome Maddison from The Final Scene. Maddison casts her spell on the 1996 teen horror The Craft.

I can’t express how badly I wanted to be a witch in my early teen years. I surrounded myself with purple crystals, burning candles and glittery spell books from the marked down book bins.

The 1990s seemed to be the idyllic age of witchcraft in pop culture, welcoming such films and shows like Hocus Pocus, Practical Magic, Charmed, Buffy The Vampire Slayer and even Sabrina The Teenage Witch. In an era of supernatural melodrama, in 1996 Andrew Fleming delivered the campy teen witch thriller The Craft.

The Craft focuses on Catholic prep highschool newcomer Sarah (Robin Tunney), who finds herself falling in with a trio of outcast teenage girls who practice witchcraft. Dubbed as ‘The Bitches Of Eastwick’, everything about these witchy teens encapsulate the essence of the ’90s. The Craft is a celebration of adolescent nonconformity and independence; an imposing fable of the age old guidance of what comes around goes around. Riddled with teen angst and garish special effects, the entertainment value is guiltily grandiose.

For those hesitant to step into the horror genre, The Craft is the perfect entry as it is not really scary at all. Aside from some creepy crawly fun in the final act, the film stays rather grounded in the world of teenage antics and the loyalty of sisterhood.

My inner teenage self will never not enjoy this movie and I can’t not watch this film without a stupid cheesy smile on my face. Put aside the obvious flaws, like the vanity of their spells cast for the enjoyments of boys, beauty and riches. Don’t waste your time getting offended and just embrace the iconic giddy wickedness of witchy war!

Let’s no forget, The Craft introduces us all to Neve Campbell and Skeet Ulrich before they popped up in the iconic 1996 Wes Craven cult classic Scream. 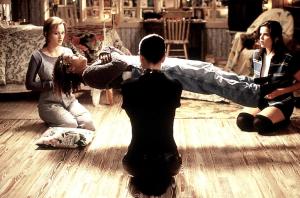 Embrace your inner wiccan and remember the moral of the story – don’t ever f**k around with the magic, that shit comes back threefold.

“We are the weirdos mister”