We’re in the final(ish) straight of the Decades Blogathon – 6 edition – hosted by myself and the legend that is Tom from Digital Shortbread. The blogathon focuses on movies that were released in the sixth year of the decade. Tom and I are running a different entry each day (we’ll also reblog the other’s post) and today I’m pleased to welcome Gill from the colourfully titled Realweegiemidget, who rewinds back to the ’80s for About Last Night (1986).

In a bid to narrow it down to a specific movie and after much deliberation, I decided on reviewing a film I could gitter for 700+ words. Options included the much reviewed The Breakfast Club (1985) starring Molly Ringwald, Ally Sheedy and Judd Nelson – hell yeah, punches fist in air – or as my friend in blogging suggested a lesser known one – Oxford Blues (1984) with Rob Lowe and Ally Sheedy – in a word, nope. So luckily, the Finnish television schedule took the decision out of my hands showing the Brat Pack romance and, therefore, weeper About Last Night (1986).

This film was based loosely on David Mamet’s one scene play Sexual Perversity In Chicago. About Last Night has Brat Packers, Rob Lowe – graduate of Brat Pack films Class (1983) St Elmo’s Fire (1986) and The Outsiders (1983) – and Demi Moore – also from St Elmo’s Fire, Blame It On Rio (1984) and Wisdom (1986) – starring as Danny and Debbie, the two main romantic leads. They are supported by the younger Belushi brother, Jim and Elizabeth Perkins in her debut role as Debbie’s best girly friend Joan.

On reading that Jim Belushi had been playing the part of Bernie, Danny’s best buddy, on stage made me puzzled as to why his brother John was considered for this role, especially as it would have been with Dan Aykroyd as Danny. As darlin’ husband put it “Emmett and Jake don’t do Brat Pack” – referring to their roles in the Blues Brothers (1980) – in his best Machete (2010) adapted line. Luckily, John passed it up, saying his brother should have the role. Because that particular pairing would be totally wrong, at all levels.

The story tells of how Danny initially meets Debbie at a water fountain at a baseball game, they meet later in a bar and there is an instant attraction as, tbh they are the most photogenic in the room. Possibly as he hasn’t a mullet and her a dodgy perm. They flirt and have what turns into a meaningful one night stand following a totally sexy moment with headphones.

Debbie is dating her “1980s douchebag boss” but this is not a sequel to St. Elmo’s Fire as some people believe. Their buddies have also pulled. Bernie brags and no doubt embellishes about his love life – although no film evidence to support this – and Joan who appears to have the start of a queue of meaningless one night stands throughout the movie. So Dan meets Debbie again and this led to montage no 1, sponsored by the Chicago Tourist Board, which I will name… Date in Chicago. Danny and Debbie hit it off out of bed too and he tells her of his dream of opening a restaurant.

As this is the 1980s much of the characters’ conversation and plot is over the landline where we note that Joan is a kindergarten teacher. Don’t believe those who tell you that’s the Poltergeist (1982) kid in the first kindergarten scene with her. This fact led to darlin’ husband becoming daring husband by riffing this, stating she would have possibly been teaching Demi’s future husband and toyboy by 13 years Ashton Kutcher. This proved true after consulting the internet and doing the maths; Ashton would have been seven going on eight on the film’s release. The men work together and Danny is especially discouraged in his job.

My favourite scene, however is where Perkins explains about the Virgin Mary to her kindergarten class. This is reminiscent of, but much more funnier than the Scottish TV programme series, Chewin’ the Fat’s sketch on the same topic. Anyway, after lots of flirting, sex and snogging Danny shows his commitment to Debbie by giving her a drawer at his place to keep her stuff in. Despite her mock jesting, this really is a big deal for her. The couple then move in together leading to the second montage, the one where they move in together and lots and lots of this particular couple’s tits and asses, not just Lowe’s, lots of tears and even more montages…

Rob Lowe is lovely in this film. He shows he can play nice romantic guys and I liked him more in this than his character in St. Elmo’s Fire, where he was 1980s douchebag personified complete with saxophone solo and dodgy earring. Rob didn’t have either in this film, much to my relief. Certain Hollywood actors should just not do earrings – please take note Harrison Ford and Bill Paxton.

To be fair none of the characters were likeable in St. Elmo’s Fire and don’t get me started on Andie McDowall ruining this movie because, to be fair, she did only really contribute to its failure. Lowe had more chemistry with Demi than he had with Mare Winningham in that particular movie, which is just as well as they spend quite a lot of the film in the nude in plenty of ‘are they aren’t they’ moments. Moore is equally sweet and she probably gave Scarlett Johansson a masterclass on how to turn a man into a gibbering wreck with a husky voice as Demi is fantastic at this.

Although the film is, according to some sources allegedly not meant to be comedic Perkins and Belushi are extremely amusing, especially Perkins who is particularly good at being deadpan. Belushi is irreplaceable as best friend Bernie and easily in one of his best roles. These characters hate each other and their friend’s choice of partner from the get go and, despite meeting up several times continue to hate each other throughout the movie which is a refreshing change from the more predictable cliché.

Although formulaic and a romance by the numbers, the film ends to the ‘will they, won’t they’ moment (for what you’ll have to watch and find out) at the end which I hate. OK, you can make your own individual ending. I had them married and moving to Little Rock, Arkansas and husband probably didn’t. But as it ends at a softball game, you could put the film on a loop and rewatch it adfinitum or go home feeling frustrated or happy with your ending 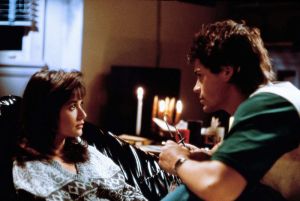 Despite the film being made in the 1980s, Moore’s jumper and silk shirt collection are so of that decade it has so much more staying power than St. Elmo’s Fire. I believe there is a remake made a couple of years back, but I don’t really enjoy remakes and believe in particular that 1980s remakes shouldn’t ever be remade, especially classics such as Red Dawn (1984). The remake in 2012 may have Chris Hemsworth, but even if he was shirtless throughout the whole movie I just couldn’t watch it.

Other point in case, in Total Recall‘s 2012 version – Colin Farrell is no Arnie Schwarzenegger. What I would prefer is as a complete romantic is my darlin’ husband’s idea for the director’s cut version, where the film About Last Night is renamed “About Last Year” and it’s plot a bit like Groundhog Day (1993) complete with ice statues.

OK, I did cry at About Last Night, but it’s more romance than rom-com. “As for the scenes of a sexual nature”… if you want to see more of Moore, how Lowe can you go…