One of modern cinema’s most compelling cinematic double acts reunite to powerful effect in this fearless and singular work of soul-searching science fiction.

A film must be doing something right when it divides its audience as much as the ending of Jeff Nichols’ fourth picture has. 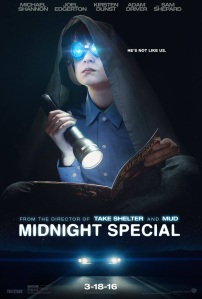 Midnight Special is nevertheless brave, bold filmmaking that sticks its landing and maintains enough mystery to leave you wanting more

Those who have followed Nichols’ career will have been here before with Take Shelter, his remarkable 2011 sophomore movie that left viewers to decide for themselves what happens next as the credits rolled.

While Midnight Special is a more overt piece of sci-fi filmmaking it remains at its core, like Take Shelter, a movie about a family trying to stay together in the face of extraordinary circumstances. It also marks the fourth occasion Nichols has worked with the powerhouse that is Michael Shannon; a partnership that each time has brought out the very best in both director and star.

Nichols has set himself apart from many of his contemporaries for his contemplative and beautifully realised portraits of Americana. He’s also a child of the ’80s and the influence of Steven Spielberg’s blue-collar sci-fi classic Close Encounters Of The Third Kind (1977) (the leading man in both films is called Roy) and John Carpenter’s E.T for grown ups Starman (1984) (Nichols acknowledges the influence by naming one of his senior Army types ‘Carpenter’) isn’t remotely disguised.

While there is little doubt there’s something very different about eight-year-old Alton (Jaeden Lieberher), we’re left to ponder what that will mean both for him and his father (Shannon), who has fled a religious cult with Alton and is trying to get to a certain location by a certain time for an unknown purpose. They are helped by Roy’s friend Lucas (Joel Edgerton) and, later on, Alton’s mother Sarah (Kirsten Dunst), but the odds are increasingly stacked against them as the full force of the military, FBI and NSA (led by Adam Driver’s Paul Sevier) come down to bear and cult leader Calvin Meyer (Sam Shepard) sends his believers in search of the boy. 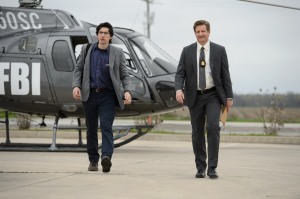 Similar to Robert Zemeckis’ Contact (1997), faith plays a significant part in Midnight Special, whether it be the extreme kind peddled by Shepard’s quietly menacing cult leader, the conviction of Lucas to go all the way for his long-lost friend or the determination of Roy in the face of extreme odds to ensure his son arrives at his rendezvous in time for a purpose he only later comes to understand.

The relationship between Shannon and Lieberher is compelling, entirely believable and heartbreaking and is taken to another level with the introduction of Dunst. In many ways, Midnight Special is sold on the strength of its superlative cast, who totally commit to their roles and help to drive the narrative forward towards its spectacular climax. 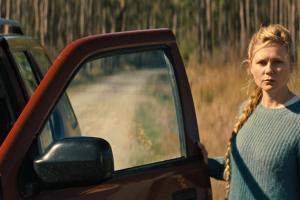 When we’re first introduced to Alton, he’s a timid little boy, confused at what is happening to him, but as the film progresses we see a subtle shift both in his body language and his mannerisms as we watch the boy grow into someone more comfortable in their own skin; someone who isn’t afraid in the end to take control of their own destiny and lead the family to their final destination.

Likewise, Nichols makes sure to give even his bit part players something to get their teeth into, most notably Bill Camp’s trod upon Doak, who has doubts about his mission from Meyer to go out armed and find the boy, but is convinced to do so believing it to be part of God’s bigger plan (“What do I know about these things?”).

If the film has a failing, it’s in the narrative threads that are discarded or not properly pursued, which invites the suspicion that significant material was left on the cutting room floor to bring the film in under two hours. Meyer dominates much of the opening act, but disappears soon after never to return, while the only remnants of the cult are the henchmen sent after Alton.

Likewise, the military angle is never entirely handled satisfactorily and feels like a narrative device to ensure certain characters arrive at the right place at the right time. Driver, meanwhile, is great, but could have used more screen time. Indeed, this is one of those rare modern examples of a movie that could have done with a longer running time.

Midnight Special is nevertheless brave, bold filmmaking that sticks its landing and maintains enough mystery to leave you wanting more. And come the end, your eyes will light up in wonder.