Out of all the days of the festival, this was the one I was most looking to as it had two of the films I was desperate to see – and boy did neither of them let me down.

Mathieu Kassovitz has never quite managed to reach the same heights as his hard-hitting debut feature La Haine (1995). In fact he was fast turning into a hack for hire with such lightweight US genre fare as the terrible Halle Berry ‘shocker’ Gothika (2003) and Vin Diesel-starring sci-fi dud Babylon AD (2008).

Well, Kassovitz is back in France and back to his best with the searing, heavyweight political thriller Rebellion, which chronicles an incident in 1988 in the French colony of New Caledonia when 27 hostages were taken by a group of indigenous guerilla fighters seeking independence, and the bloody military rescue operation that subsequently took place.

Kassovitz films the drama through the eyes and experiences of Philippe Legorjus (played by the director himself), a Captain with the French GIGN counter-terrorist special forces, which were called on to assist the army with tracking down the ‘insurgents’ and freeing the hostages.

Legorjus and his men are primarily trained to deal with hostage-takers through negotiation, but the Captain quickly gets the impression that talking isn’t the number one goal of the military brass and French minister Bernard Pons (played by Daniel Martin), especially when there’s a presidential election taking place in France and incumbent President François Mitterrand and his opponent Jacques Chirac are trying to out-do each other over their tough stances on the unfolding crisis.

Legorjus nevertheless tries to make contact with the group holding the hostages and succeeds after he is himself taken hostage. He wins the hard-earned trust of leader Alphonse Dianou (Iabe Lapacas) and is set free, promising to do what he can to give the group a platform in which to put their case for independence forward.

With the situation still tense, Legorjus works around the clock trying to convince the powers that be that the hostage-takers are willing to negotiate, but keeps running into brick walls until time runs out and a full military assault is ordered. With no time left, Legorjus realises he must betray Dianou’s trust in an effort to save as many of the hostages as he can.

Counting down over the course of 10 days until the dramatic, bloody assault on the cave where the hostages are being held, there’s a growing sense of inevitability that Legorjus is fighting a losing battle.

There are pointed remarks sprinkled throughout the film as to where this path is headed; when Legorjus tells a lawyer living on the island that the order to attack has been given, he asks the captain incredulously “the government wouldn’t do that would they?”. Another moment comes earlier in the film when Legorjus reminds his men that the population of New Caledonia are officially French citizens and therefore not ‘the enemy’. Needless to say these words ring hollow later in the film.

Thought-provoking and provocative, the anger of the film seeps out of every frame. It’s likely to cause controversy when it is released in France in November, but there should be no mistaking that this is brave, prescient film-making of the highest order.

Michael Shannon has in the space of just a few short years broke out from bit parts to become one of America’s most exciting acting talents.

His piercing stare and intense eyes singled him out for parts as unhinged lunatics in films such as Bug (2006) and Revolutionary Road (2008), for which he was Oscar-nominated. It probably wasn’t until he was cast as prohibition agent Nelson Van Alden in HBO’s Boardwalk Empire that he was allowed to properly broaden his horizons and show there was more to him than that.

This has continued in 2011 with Return, the disappointing indie drama also shown at the festival which he nevertheless gave a thoughtful, restrained performance as the husband of a soldier returning from a tour of duty, and now Take Shelter. 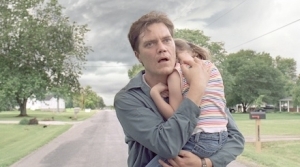 Shannon plays Curtis LaForche, a loving husband to wife Samantha (the ubiquitous Jessica Chastain) and deaf daughter Hannah (Tova Stewart). He’s your classic everyman, a guy doing the best he can for his family through his job at a sand-mining company in a small Ohio town.

But all is not well with Curtis. He is being plagued by apocalyptic dreams – massive storm clouds gather overhead; rain resembling motor oil falls from the sky; masses of birds fly ominously above and crazed strangers attack him and his daughter.

The dreams are so real to Curtis that he becomes convinced they are something far more frightening – visions of things to come. With these terrifying thoughts running through his mind Curtis gets to work on beefing up the storm shelter at the back of the house. At the same time he weighs up whether he is succumbing to the same mental illness that has left his mother in a home for the past 25 years.

To this end, he goes to the library to check if he has the symptoms and goes to see a counsellor on his doctor’s advice. At first the sedatives he is given to help him sleep seem to work, but then the dreams return, more frightening than ever and he re-doubles his efforts to get the shelter ready for what he is convinced is the storm to end all storms. However, his actions have serious ramifications on his friends who think he’s lost his mind, on his job and with his wife, who struggles to understand why Curtis seems so hell-bent on bankrupting them.

Shannon and writer-director Jeff Nicholls worked before on Nicholls’ debut feature Shotgun Stories (2007) and there’s clearly an understanding between the two of them on how to get the best out of each other. Shannon turns in a career-best performance as a man holding on by his fingertips in an unsafe world, who is struggling to comprehend the visions he is having and unsure whether he is protecting his family from harm or putting them in harm’s way by his actions.

Chastain is given a more rounded role than the angelic, ethereal one she played in Terrence Mallick’s The Tree of Life earlier this year and does a fine job, although quite why the scene in which Curtis finally tells her what’s going on doesn’t allow her a response is a bit mystifying.

The dream sequences are especially unsettling, while the ending, which makes you reassess everything you’ve seen before, is sure to be a talking point for those watching it. And watch it you should.