For a film with so much baggage it could clog up a whole fleet of invisible S.H.I.E.L.D jets, this latest instalment in the unstoppable Marvel juggernaut somehow manages to avoid collapsing under the weight of its own cinematic universe. 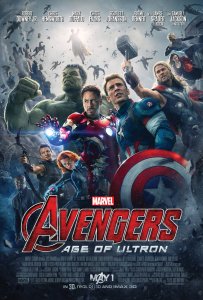 Avengers: Age Of Ultron may not be the game changer its predecessor was, but Whedon has closed this particular chapter in the Marvel Cinematic Universe about as as well as he could. Now what’s next?

Guided by any hand other than that of Joss Whedon, Avengers: Age Of Ultron could so easily have turned into another Spider-Man 3 (2007) – overloaded to the point of bewilderment.

Despite having enough characters to fill a whole season of Game Of Thrones and a plot that, when boiled down, follows a very similar thread to its 2012 predecessor (supervillain exposes the underlying tension between our team of superheroes before they assemble stronger-than-ever for the good of humanity), Whedon just about keeps the plates spinning.

Ignoring Jeff Goldblum’s immortal warning from Jurassic World that man shouldn’t be “so preoccupied with whether or not they could that they didn’t stop to think if they should”, Tony Stark/Iron Man (Robert Downey Jr), with the help of Dr Bruce Banner/Hulk (Mark Ruffalo) creates artificial intelligence to give life to his Ultron project, a global defence force of Iron Men to help thwart threats both terrestrial and extraterrestrial.

No sooner does Ultron (James Spader) spark up then he unleashes a diabolical plan to wipe out the Avengers; a scheme bolstered by the assistance of the super-fast Quicksilver (Aaron Taylor-Johnson) and the mind-bending Scarlett Witch (Elizabeth Olsen); mutants whose grudge against Stark seems well founded.

Tony Stark/Iron Man (Robert Downey Jr) and Hawkeye (Jeremy Renner) wonder what to do next in Avengers: Age Of Ultron

With the odds stacked against them, the Avengers – Iron Man, Captain America (Chris Evans), Thor (Chris Hemsworth), Black Widow (Scarlett Johansson), Hawkeye (Jeremy Renner) and Hulk – must come together as never before in order to stop Ultron.

In some ways, Age Of Ultron is actually superior to its monstrously successful forebear. The time given to each character is more democratic, in particular Hawkeye, who virtually becomes the beating heart of the team.

We also finally get to see Hulk properly lose it in an epic bust up with Iron Man, while the film’s final extended set piece endeavours to keep the action grounded (a bad pun for anyone who’s seen the movie, sorry) while all hell is being unleashed and – unlike some other superhero flicks – actively gives a damn about the poor civilians caught up in the ensuing chaos.

It is at its strongest when it takes the time to let the characters breathe and interact with other, most amusingly at a party at Avengers HQ (formerly Stark Tower) in which the team kick back and chew the fat alongside some of the franchise’s periphery characters, including Don Cheadle’s War Machine and Anthony Mackie’s Falcon. A scene in which Thor challenges his comrades to pick up his hammer is lovely and mirror’s the film’s best exchange late on between the crown prince of Asgard and a character whose origin I won’t spoil. 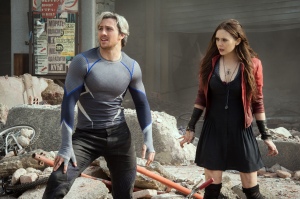 In spite of Spader’s cooly malevolent delivery, Ultron fails to leap off the screen as effectively as Loki managed to in Avengers Assemble. However good the visual effect, a human villain will almost always engage more with the audience and if that bad guy is a maniacally grinning Tom Hiddleston then so much the better.

Whedon has now taken a step back from Avengers duties and it’s not too difficult to see why. In a recent interview he said: “There’s basically 11 main characters in this movie, which is quite frankly too much.” When your writer/director acknowledges there’s simply too much stuff to crowbar into one movie you have to start wondering if he maybe has a point. That he’s kept this stew from boiling over is, frankly, remarkable.

The torch has now passed from a seemingly relieved Whedon to Captain America: The Winter Soldier‘s Anthony and Joe Russo who, before helming the two-part Infinity War will first serve up Cap’s next solo outing Civil War – it’s safe to say there’s a lot of war coming up.

Avengers: Age Of Ultron may not be the game changer its predecessor was, but Whedon has closed this particular chapter in the Marvel Cinematic Universe about as well as he could. Now what’s next?