After seriously dropping the hammer with the disappointing Thor: The Dark World, Marvel has got its mojo back with this superheroic espionage thriller that packs a real biff, pow and bang.

Although on paper a two-dimensional relic of 1940s flag-waving propaganda comics, Captain America’s onscreen adventures are fast becoming the Marvel movies to look out for

On its 2011 release, Captain America: The First Avenger was an unexpected pleasure, skillfully mixing pulpy action and period nostalgia with a World War Two setting that perfectly suited the old school heroics of Captain Steve Rogers (Chris Evans, a great fit for the role).

His appearance alongside Iron Man, Thor et al in Avengers Assemble (as it was called over here) was largely about him trying to come to terms with the modern world and it’s an issue that inevitably permeates through The Winter Soldier.

However, screenwriters Christopher Markus and Stephen McFeeley (who also wrote the first movie) deserve a lot of credit for crafting a story that transcends fish-out-of-water narrative tropes and instead gives the character something he can really get his shield stuck into.

While the bad guys he’s fighting this time around aren’t as clear-cut as the uber-Nazis he was battling in The First Avenger, Cap’s inherent goodness and staunch belief in the enduring power of freedom are traits that prove just as necessary in The Winter Soldier.

Cap (Chris Evans) expresses his concerns as to the direction S.H.I.E.L.D is taking to Nick Fury (Samuel L Jackson) in Captain America: The Winter Soldier

Since being thawed out from cryogenic stasis at the end of The First Avenger, Rogers has allied himself with S.H.I.E.L.D, the labyrinthine spy and law-enforcement network led by Nick Fury (Samuel L Jackson, given more to do this time) – but is growing ever-more sceptical about its true motives. Rogers is forced to go on the run from S.H.I.E.L.D after finding himself in the middle of a massive conspiracy and, with the help of deadly assassin Natalia Romanoff, aka Black Widow (Scarlett Johannson, also with more to do this time), and fellow war veteran Sam Wilson (Anthony Mackie, underused) sets about uncovering the truth.

While Thor’s second solo outing got lost in an Asgardian vortex of Dark Elves and cod-Lord Of The Rings nonsense, Cap’s big return has a far more engaging narrative.

The central plot makes no bones about its nods to 1970s conspiracy cinema classics like The Parallax View (1974) and Three Days Of The Condor (1975), right down to the casting of Condor‘s Robert Redford, who effortlessly raises the level of the film every time he’s on screen as senior S.H.I.E.L.D figure Alexander Pierce.

The juxtaposition of Cap’s clearly defined outlook of right and wrong with the murky, compromised ideology of S.H.I.E.L.D is a nice idea and a very contemporary concept, but the film doesn’t trust the audience to work it out for themselves. When he witnesses just how far S.H.I.E.L.D is willing to go to “neutralise threats”, a rattled Rogers tells Fury “This isn’t freedom, this is fear”; to which Fury replies the agency “takes the world as it is, not as we’d like it to be”. The point is made several more times in case we haven’t picked it up.

In spite of the lack of subtlety, it’s undoubtedly the most interesting element of both this and any other Marvel picture to date, and one you feel directors Anthony and Joe Russo would rather have concentrated on more. This being a superhero movie, however, it’s a prerequisite that things go boom sooner or later.

That being said, an early set piece involving an ambush on Fury’s S.H.I.E.L.D mobile is exhilarating stuff, while a fight involving Rogers and a dozen or so S.H.I.E.L.D goons in a lift gets the pulse racing. It’s when the scale of the action is amped up that the film – especially in the final act – loses its way and turns into just another Marvel movie involving a stack of CGI explosions in the sky. 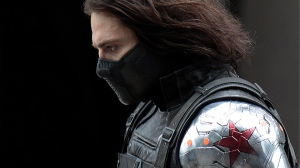 In spite of being part of the title, we’re given only a brief taste of who and what the Winter Soldier is. It’s a plot thread you suspect had more meat on it during early drafts and is left dangling for Cap’s third solo movie. At 136 minutes, the film is too long anyway, so it’s not surprising this wasn’t developed more.

Although on paper a two-dimensional relic of 1940s flag-waving propaganda comics, Captain America’s onscreen adventures are fast becoming the Marvel movies to look out for.