We’re onto Day 3 of the Decades Blogathon – ‘7’ edition – hosted by myself and Tom from the brilliant blog Thomas J. The blogathon focuses on movies that were released in the seventh year of the decade. Tom and I are running a different entry each day (we’ll also reblog the other’s post) and for today we’re tracking back to a movie where the hair was biiiig and there was death by stereo in 1987’s horror comedy The Lost Boys, covered by Catherine from Thoughts All Sorts.

Those ’80s. They were something weren’t they? I had a real good chuckle while watching The Lost Boys (1987) again. Had forgotten about the hairstyles, clothes and general ’80s feel. Remember those big Swatch wall watches? 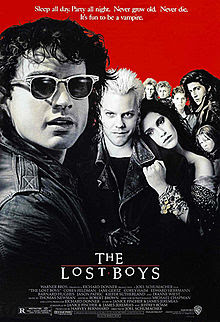 This is one that I probably watch more for nostalgic value than anything else. I clearly remember being allowed to rent two videos from the video store (remember those?) with some friends one weekend (many, many years ago).

My Science Project and The Lost Boys were the two lucky selections. The latter was the only one that I remembered from then and has even made its way into my DVD collection. Oh boy, not sure if I should smile or cringe. 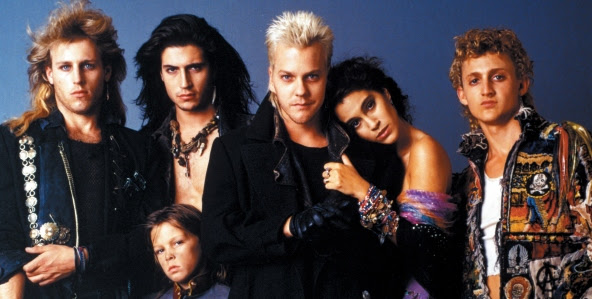 The Lost Boys has Corey Haim and Jason Patric as brothers Sam and Michael moving to Santa Carla with their divorced mother. If moving in with their weird and wacky grandfather isn’t enough, they need to find their way around a town seen as the murder capital of the world and plastered with missing people posters.

Michael is smitten with a girl he sees one night and so becomes involved with a strange gang of bikers (who avoid the sun for other reasons than sunburn) led by a very young Kiefer Sutherland as David. Sam befriends the Frog brothers Edgar (Corey Feldman) and Alan (Jamison Newlander). Convenient having vampire hunters as friends. You never know when you’ll need them. 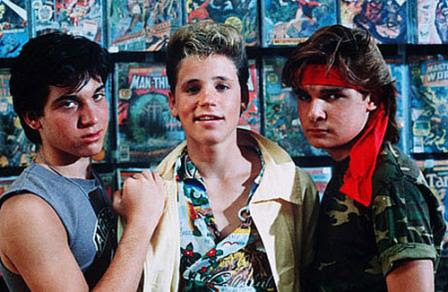 More comedy and fun than horror, The Lost Boys was directed by Joel Schumacher and has some great music. From the awesome People Are Strange (Echo And The Bunnymen’s cover of The Doors) to the exploding vampires (in gunky chunks of flesh that splatter entire rooms or goo that seeps through all your water pipes) you’ll be smiling and having a ball. But then, maybe it’s just me.

Thanks to Three Rows Back and Thomas J for taking me back 30 years for their Decades Blogathon.