There can’t be many films out there that arrive on the big screen with as much internet-fuelled ill-will as Paul Feig’s Ghostbusters.

Whilst not the car crash that many haters had hoped for or expected, Ghostbusters regretfully compromises itself by trying to be all things to all people – what a shame

Whilst 2014’s The Interview incrediby led to a diplomatic incident between the United States and North Korea, Feig can’t have imagined the seismic social media explosion that awaited him when he announced he would be directing the third installment in the Ghostbusters franchise – featuring (dun dun duuu…) an all-female cast.

Ivan Reitman’s massively successful 1984 original remains a much-loved touchstone in the lives of many a cinemagoer, but the unfiltered rage meted out to Feig and, later, the reboot’s core cast of Melissa McCarthy, Kristen Wiig, Kate McKinnon and Leslie Jones came from a particularly ugly place. 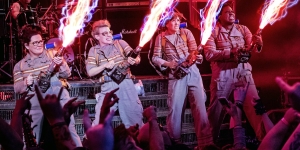 Who ya’ gonna call? That’s right.

Watching Ghostbusters, it becomes clear that, far from ignoring the rampant negativity of YouTubers with too much time on their hands, the film has instead chosen to embrace it.

Feig and Katie Dippold’s script features more than one reference to shallow comments left by internet trolls who can’t seem to get their heads around the concept of females bustin’ ghosts. Such an approach, whilst admirable, is also systematic of a film that doesn’t seem to know what it wants to be.

Indeed, it could be argued that the film’s chief villain, Neil Casey’s Rowan North, is the embodiment of the nerdy, disgruntled misfit Feig and co perceive to be 2016 Ghostbusters‘ biggest hater. As it happens, Casey is actually pretty good in the part, although the spectral chaos he unleashes in the final act makes little or no sense.

The decision to feature cameos from the surviving members of the original Ghostbusters is a serious mis-step (Harold Ramis is saved from this on account of his being dead, although a bust of his head is a lovely touch), with Bill Murray looking bored as a flamboyantly dressed sceptic, while the film virtually grinds to halt to make way for Dan Ackroyd’s laboured cameo. 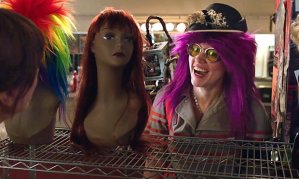 Wiig and McCarthy are gifted comedians, but they are given little to get their teeth into here and it’s left largely to the excellent McKinnon to deliver some of the film’s best sight gags. Jones, meanwhile, does her best with what is a limited role and plays off nicely against her co-stars.

Alongside McKinnon, the film’s biggest revelation is Chris Hemsworth as their nice-but-dim secretary Kevin Beckman. His interview scene is hands down the funniest scene and Hemsworth gives an inspired performance brimming with physical humour, whether it be wearing glasses without the lenses, asking his colleagues which ridiculous headshot works best or enquiring as to their policy on bringing pets to work (wonderfully surreal).

The special effects have been accused by some, a little unfairly, as looking like something from Scooby Doo, although the multi-coloured ghosts wouldn’t necessarily look out of place in a film featuring the Mystery Machine gang. The appearance by the Stay Puft Marshmallow Man is pointless, but fun, whilst the cameo by Slimer (who has got a wife and kids now, seemingly) is a sop to the original and should have been consigned to the containment unit.

Slimer’s extended appearance takes place during a final act that is terribly edited (a sequence involving a group of soldiers and police who are frozen mid-disco move is baffling simply because the scene leading up to it was cut) and is devoid of any real threat. The Ghostbusters flee from the 10-storey high big bad ghoul, but quite clearly cause it serious distress with their proton packs, while the less said about the getting-sucked-into-another-dimension ending the better. Simply put, it doesn’t work.

There are glimpses of the film you suspect Feig originally had in the back of his mind, but it plays too safe and ends up the worse for it.

Whilst not the car crash that many haters had hoped for or expected, Ghostbusters regretfully compromises itself by trying to be all things to all people. What a shame.