It’s hard to believe but we are officially in the penultimate day of the 2016 Decades Blogathon, a 10-day event in which myself and the envy-inducing Mark from the terrific Three Rows Back have been asking bloggers to share their thoughts on films from decades past, releases from years ending in ‘6.’ We will have two posts today, this being one of them of course, and then Mark and I will wrap things up tomorrow, Friday. It’s been an incredible experience once again and we continue to thank our participants for making it happen. Speaking of, I’d like to welcome back Drew of Drew’s Movie Reviews for his take on the 2006 stoner comedy delight Grandma’s Boy. Have at it, Drew! 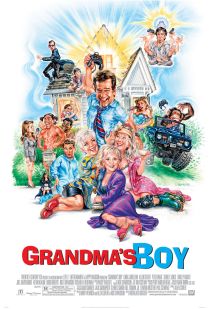 When video game tester Alex (Allen Covert) gets kicked out of his apartment, he moves in with his grandma (Doris Roberts) and her roommates. Meanwhile, at Alex’s work, Samantha (Linda Cardellini) has been sent by the company’s corporate office to oversee the final stages of production of their latest video game.

Grandma’s Boy isn’t going to get any recognition for being overly creative or groundbreaking, but dammit does it make me laugh.  There is something about toilet humor that always tickles my funny bone.  The characters are constantly berating each other, cursing up a storm, making sex jokes and getting high.  Despite all that, it has charm behind it. Allen Covert and Nick Swardson are so much fun to watch together on screen.  Some of the best lines of the film come from when these two are bouncing off each other.  The plot is super simple, not providing any twists or turns that allow the film to focus on the comedy. Grandma’s Boy revels very much in making as many obscene jokes as it can.  Some of the jokes hit because they are funny but others hit because you can’t help but think “they did not just do that.” The late Doris Roberts may seem out of place in a stoner film with her sweet grandma persona and all but she holds her own and meshes surprisingly well with the rest of the cast, like Covert, Swardson and Peter Dante, who fit perfectly well into the molds of their characters.

I thought Grandma’s Boy was GOOD

.  It’s brand of comedy may not be for everyone but if you sit back and relax, you might find yourself having a good time.

Jeff: What does “high score” mean? New high score, is that bad? What does that mean? Did I break it?