It’s something of a paradoxical quirk that the work of one of Britain’s most vital and uniquely gifted filmmakers should be so un-British in its style and subject matter. 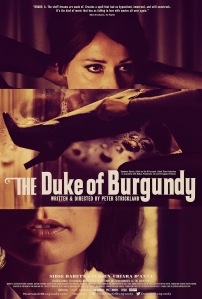 Peter Strickland’s assured debut Katalin Varga (2009) saw the writer/director up sticks and decamp to Transylvania to get his slippery revenge drama made, while the giallo horror movie Toby Jones’s unassuming foley artist works on stirs up an increasingly frenzied hornet’s nest in his remarkable follow-up Berberian Sound Studio (2012).

This, the third beguiling motion picture from Strickland serves as yet another reminder that this is a filmmaker who resolutely refuses to be bound by the trappings of genre cinema. 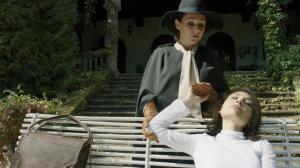 Whilst cinephiles will fall over themselves to spot the references to the sleazy Euro-erotica of the 1970s (movies that were generally seen as being more notable for their lascivious titles than for their quality) the film ostensibly tips its hat to, The Duke Of Burgundy operates at a far more sophisticated level in its examination of the BDSM-charged relationship between Cynthia (Sidse Babett Knudsen) and Evelyn (Chiara d’Anna).

Set in a nondescript wooded locale seemingly lifted from the pages of a Grimm fairytale, the interplay between Cynthia and Evelyn appears to suggest a mistress/servant dynamic, with Cynthia the dominant sadist who lazes around whilst ordering Evelyn to shine her boots or scrub her underwear.

However, the film’s sleight of hand is gradually uncovered as the give-and-take between the two is revealed to be a role play that, as the cracks of repetition start to show, suggests the power dynamic isn’t quite as one-sided as we first thought.

The butterfly effect: Chiara D’Anna’s Evelyn in The Duke Of Burgundy

Cynthia and Evelyn exist in a world apparently devoid of men, while they and the community around them are all lepidopterists – collectors and studiers of moths and butterflies (the eponymous Duke of Burgundy is a reference to the species of butterfly, rather than a male ruler).

The numerous cases of carefully arranged butterflies and moths displayed around Cynthia’s abode seem at first to suggest a visual metaphor for the controlling master/servant dynamic, but as their relationship metamorphoses into something more striking and free-floating the symbolism of the butterfly becomes crystallised.

As stylised as the film is (the bucolic production design and Nic Knowland’s sun-dappled cinematography are a joy), Stickland’s genuinely funny script is full of absurdist flourishes, from the mannequins sat at the back of a lepidopterary lecture to the straight-faced suggestion by Fatma Mohamed’s elaborately dressed Carpenter of a “human toilet” as a potential birthday present for Evelyn.

Sidse Babett Knudsen’s Cynthia in The Duke Of Burgundy

Whilst the more intimate scenes between the two leads are undoubtedly sensual, it never veers into leering exploitation and is almost always subverted by an amusing look or witty line (Cynthia’s declaration to Evelyn that “I need an instruction manual to get into half the things you buy me” being a case in point).

Both d’Anna and Knudsen play off each other beautifully and breathe an enchanting and sensitive life force into an unorthodox and complex bond; one that is more fragile and hypnotic than a butterfly and woozily evoked by the stirrings of Cat’s Eyes’ dreamlike soundtrack. Meanwhile, a stunningly simple throwaway dissolve from woodland to grass has to be one of the most breathtaking shots of the year.

A seductive and singular work of real vision, The Duke Of Burgundy will take flight in your imagination and confirms Strickland as an auteur of major standing.