The year 1968 proved to be a particularly fertile one when it came to science fiction and apes. 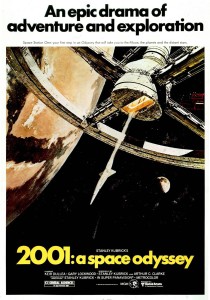 A work of genius that will continue to enrapture us, 2001: A Space Odyssey remains one small step for Stanley Kubrick; one giant leap for cinema

Released in the US just days later, Stanley Kubrick’s 2001: A Space Odyssey missed out on a similar award, as popular myth would have it, because the Academy judges believed the apes featured in the film were real rather than men in suits.

The Dawn of Man. Apes discover a thirst for violence in 2001: A Space Odyssey

Whether true or not, it serves as a fitting metaphor for the beguiling nature of Kubrick’s remarkable masterpiece, which remains devilishly confounding and awe-inspiring more than four decades on.

It’s the film’s (and by extension Kubrick’s) refusal to kowtow to those who can’t abide a mystery that is a big reason why we keep revisiting 2001 time and again in the hope of cracking the enigma; all the while knowing that it is a fool’s errand.

Based on Arthur C. Clarke’s novella The Sentinel, 2001 posits the theory that mankind has been aided in its evolutionary journey by an almost infinitely superior alien intelligence, represented by imposing black monoliths. From imbuing early hominids with the transformative leap to discern that a bone can be used as both a tool and a weapon to claim territory from others and to kill, an identical monolith uncovered on the moon four million years later triggers mankind’s next step when it emanates a piercing radio signal towards Jupiter.

Dr Dave Bowman (Keir Dullea) stares into the void in 2001: A Space Odyssey

The Discovery spacecraft is sent to Jupiter to investigate the signal with a crew including Dr Dave Bowman (Keir Dullea), Dr Frank Poole (Gary Lockwood) and the ship’s computer HAL 9000 (voiced by Douglas Rain), but as they near the planet the mission comes under jeopardy and the next step in our evolution awaits.

While there had been science fiction films of a serious nature before, 2001 represented a unparalelled leap forward not only for the genre but for cinema itself. Simply put, no-one had seen anything like it before.

Although certain aspects of the film feel dated (Pan Am is no more of course, while Hardy Amies’ costume design for the stewardesses, for example, has that retro-future look which pegs it to the Sixties), it’s incredible just how much stands the test of time.

Ever a stickler for the smallest detail, Kubrick was insistent the spacecraft seen in the film should be grounded in science rather than fantasy. Life onboard the Discovery is shown to be routine despite characters seemingly bypassing the laws of physics by appearing at different angles in close proximity; a remarkable feat achieved through the use of an ingenious set built around a centrifuge.

Represented by a single red glowing light, the film’s most effective piece of design also happens to be its most brilliantly realised character. Kubrick is able to imply so much in HAL’s demeanor by clever editing and a subtle shift in camerawork, whether it be paranoia, threat or desperation; all intensified by Rain’s delivery. When HAL informs a TV interviewer that “no 9000 computer has ever made a mistake or distorted information. We are all, by any practical definition of the words, foolproof and incapable of error”, it’s akin to a character coughing and saying they’re alright before dropping dead 10 minutes later.

Douglas Trumbull’s pioneering special effects still look good today and must have been mind-blowing at the time, which probably explains why Kubrick luxuriantly devotes whole sequences to space planes docking or arriving on the moon. It’s safe to say that no film today would get away with spending so much time on such things, but there’s a hypnotic quality to watching these scenes as Strauss’ Blue Danube Waltz washes over you.

The use of classical music is another of 2001‘s timeless qualities. Kubrick decided early on to strip the narrative and exposition back as much as possible (as opposed to modern day sci-fi films; I’m looking at you Interstellar), which puts more weight on the soundtrack’s shoulders. Older compositions sound like they’ve been written especially for the film, while György Ligeti’s eerily discordant works have a ghostly quality that creeps under the skin and lends its scenes an extra bite.

Little moments stay with you, such as when an ape casts a glance up to the moon the night before the monolith appears, foreshadowing what’s the come – so indelibly realised by the audacious match cut from the bone being tossed into the air to the space craft orbiting the Earth four million years later.

So, what exactly are the monoliths? Some have said they represent God (the ape touching the monolith is reminiscent of Michelangelo’s famous painting The Creation of Adam). Perhaps it’s best not to think about it too much, though. If in doubt, take a stress pill and read Roger Ebert’s wry analysis.

There is a wonderfully elliptical nature to the film that’s almost as perfectly formed as the monoliths. Just as we start with the Dawn of Man, so too do we finish with another birth in the form of the iconic starchild. Four million years may have passed, but we are just like that early hominid, casting our eyes up to the sky in fear and wonder.

A work of genius that will continue to enrapture us, 2001: A Space Odyssey remains one small step for Stanley Kubrick; one giant leap for cinema.