As good a writer as JRR Tolkien was, he wouldn’t have got very far in Hollywood if his description of the epic battle of orcs, elves, dwarfs, men and anyone else lying around was anything to go by. 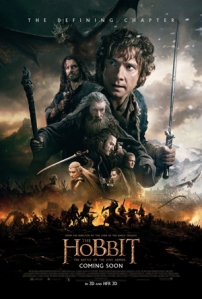 And so we come to the end of Jackson’s Middle Earth fellowship. LOTR-lite it may be, but fantasy cinema is all the richer for The Hobbit having been in it

Passed off by Tolkien in just a few words, Peter Jackson obviously had other ideas when imagining how he’d like to conclude his stint as Middle Earth’s resident director.

It’s a decision in keeping with the whole exercise of making three movies out of a 300-page book, which is ironic when you consider he originally envisaged making two films out of The Lord Of The Rings; a three-book saga spanning more than 1,000 pages. 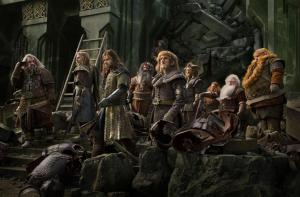 The loyal band of dwarfs prepare for war in The Hobbit: The Battle Of The Five Armies

That said, Jackson has thrown everything and the kitchen sink into this final chapter of his prequel trilogy and, while there is much to enjoy, it won’t change anyone’s opinion that The Hobbit ultimately remains the poor cousin of LOTR.

We pick up where we left off last time, with the dragon Smaug (voiced by Benedict Cumberbatch) on his way from the Lonely Mountain to smite Laketown and its terrified folk. It’s a breathless opening salvo, arguably the best sequence in the entire trilogy as Bard (Luke Evans) desperately tries to bring the beast down as the town is incinerated around him.

Watching on helplessly are hobbit Bilbo Baggins (Martin Freeman) and his dwarf companions, led by Thorin Oakenshield (Richard Armitage), who disturbed Smaug’s slumber in search of untold wealth and the coveted Arkenstone, a precious gem Thorin is desperate to reclaim.

Gandalf (Ian McKellen) looks on worried in The Hobbit: The Battle Of The Five Armies

When word spreads of Smaug’s death, an elf army under Thranduil (Lee Pace) marches to the Lonely Mountain to reclaim lost treasure, while a separate force of orcs led by Azog the Defiler (Manu Bennett) also approaches. While all hell breaks loose outside the mountain, as men, dwarfs and elves go to war against the vast numbers of orcs, inside the mountain an increasingly unstable Thorin exasperates his fellow dwarfs and Bilbo by refusing to see sense.

Just as Jackson coiled the spring in the first half of The Return Of The King before unleashing CGI-infused mayhem, he employs a similar approach in The Battle Of The Five Armies. Characters look either pensive or defiant as they talk of impending war, while Jackson cranks up the expectation by regularly cutting to the orc hordes drawing ever nearer to the Lonely Mountain. 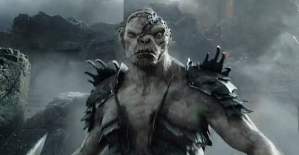 Azog the Defiler (Manu Bennett) looks his usual grumpy self in The Hobbit: The Battle Of The Five Armies

When it finally does come, the battle is everything you expect; brutal and frenzied, with seemingly endless waves of orcs pitted against the dwindling alliance. However, as visually impressive as it is, it doesn’t involve you as much as the epic battle of Helm’s Deep in The Two Towers.

The stakes may be just as high, but the clammy terror of a band of brothers fighting for their lives against an implacable army of Urak Hai is what sets Helm’s Deep apart. Too often, Jackson is content to pit CGI army against CGI army; an impressive enough site to be sure but one that will never grab you as much as seeing real people at each other’s throats. 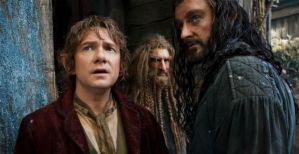 Bilbo Baggins (Martin Freeman) and Thorin Oakenshield (Richard Armitage) look worried in The Hobbit: The Battle Of The Five Armies

While the skirmish is the film’s key selling point, it works best when boiling things down to the struggle going on inside Thorin’s mind. Overcome by ‘dragon sickness’, his slide into mental illness is convincingly played by Armitage, who shows enough of the old Thorin to convince Bilbo (a conversation between the two that starts with an acorn is a standout) and co that he’s not gone completely off the deep end. Jackson has brilliantly played up the possessive effects ‘precious’ treasure can have on otherwise strong-willed characters throughout his Middle Earth saga and the lightning bolt moment Thorin experiences during a surreal hallucination is particularly effective.

Freeman does his best with the limited screen time Bilbo is given and lights up every scene he’s in, but once the battle kicks in he’s pretty much sidelined in favour of head-butting dwarves and snarling orcs.

Legolas (Orlando Bloom) and fellow elf Tauriel (Evangeline Lilly) go in search of orcs in The Hobbit: The Battle Of The Five Armies

Also left on the sidelines is Ian McKellen’s Gandalf, whose rescue from the clutches of Sauron by his fellow White Council members (most notably Cate Blanchett’s luminous Galadriel) is an early highlight, but feels rushed (ironic, I know). Once Gandalf joins the party at the Lonely Mountain he soon gets swallowed up in the rest of the action.

And so we come to the end of Jackson’s Middle Earth fellowship. LOTR-lite it may be, but fantasy cinema is all the richer for The Hobbit having been in it.