It’s love Jim, but not as we know it in Spike Jonze’s prescient tale of one man’s unconventional relationship with his operating system. 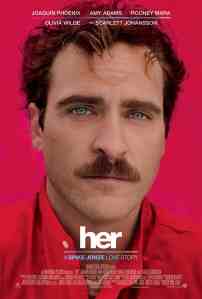 Her treads a well-worn path, but does so in such a wonderfully uncynical and sweet-natured way you’ll be glad you went down it

Since his striking debut Being John Malkovich, Jonze has divided critical opinion between those who embrace his unique vision and those who deride his films as being painfully self-conscious.

It’s unlikely his new film will woo the naysayers, but anyone who writes off Her as a knowing exercise in hipsterism is blinding themselves to one of cinema’s most honest, painful and beautiful love stories since the 2007 Irish charmer Once. 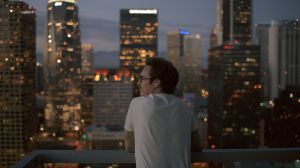 Shanghai fills in for near future LA in Her

The premise of Her sounds like an offshoot of Charlie Brooker’s tech-led anthology TV series Black Mirror. Set in a near future LA, lost and lonely Theodore Twombly (Joaquin Phoenix) is still coming to terms with the breakdown of his marriage to childhood sweetheart Catherine (Rooney Mara) and can’t bring himself to sign the divorce papers. The only really meaningful attachment he has is with Amy (Amy Adams), an old friend whom he once dated years back.

His life changes suddenly when he purchases a new highly advanced Operating System, which calls itself Samantha (voiced by Scarlett Johansson) and is soon conversing with Theodore either through his computer or via his phone linked to an earpiece like she’s flesh and blood.

Theodore finds himself increasingly drawn to Samantha, who represents everything he could wish for in a woman… except to exist in physical form.

This is Her‘s big question – can a relationship work when two people aren’t physically together? In spite of the film’s digital age outlook, its central conceit has been a staple of screen romances for decades, from Ernst Lubitsch’s 1940 classic The Shop Around The Corner, to its e-make You’ve Got Mail.

Technology, specifically our slavish devotion to it, plays a key role in the film. Whether he’s on the train, in a lift or walking along the street Theodore, like everyone else it seems, is glued to their mobile devices (much like today in fact) or listening to something through their earpiece. It’s little wonder he’s so lonely; he’s surrounded by people who are as lost in their own little world as he is. Although not presented as a dystopia, we’re left to decide for ourselves if this is the kind of future world we’d be happy living in.

In a sad irony, Theodore’s job is to compose handwritten letters of love and devotion for people unable to find the words themselves. In a way, this doesn’t make him too dissimilar to Samantha in that the service he provides is there to help improve a stranger’s life; in some cases over the course of many years as he explains at one point.

In spite of a few slight eccentricities, Theodore is a character we warm to and come to care about. Phoenix’s eyes convey a sadness and fear that break the heart, while his shuffling gait suggests a guy who’s sleepwalking nowhere in particular. However, with the introduction of Samantha his posture changes, his eyes light up and he radiates a positivity you suspect he hasn’t felt for a long time. Phoenix proved he could really act in The Master and here gives another fascinating take on detachment.

We buy into his relationship with Samantha and this is largely down to Johansson’s (excuse the ironic pun) full-bodied performance. The path they take is, for the large part, a believable one, even when Samantha drafts in a sex surrogate in order for them to enjoy ‘physical’ intimacy. 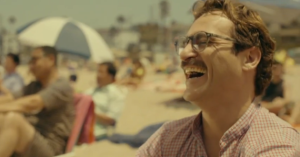 And happier times. Theodore (Joaquin Phoenix) shares a joke with Samantha (voiced by Scarlett Johannson) in Her

A big reason the film works is Jonze’s beautifully observed script. Many of us will identify with the melancholy Theodore feels at the passing of a cherished relationship, as well as the fear, happiness and scepticism he experiences when his once dormant heart reignites.

This being a Jonze joint, the film’s aesthetic is painterly. Shanghai steps in for near future LA (where the fashion appears to be for men to wear trousers almost up to their ribcage) and is a perfect fit for Theodore – gleaming surfaces paint a warm sheen over the sadness and remoteness that exists just beneath.

Her treads a well-worn path, but does so in such a wonderfully uncynical and sweet-natured way you’ll be glad you went down it.