This is my latest contribution to The Big Picture, the internationally-recognised magazine and website that offers an intelligent take on cinema, focussing on how film affects our lives. This piece about Sidney Lumet’s Cold War thriller Fail Safe was written as part of The Big Picture’s Lost Classics strand, although I am including it within my list of Great Films You Need To See.

No doubt frazzled by the Cold War running ever hotter, it’s perhaps not surprising audiences in 1964 preferred their nuclear scare movies to be in the mould of the scabrously satirical Dr Strangelove rather than the grimly portentous Fail Safe. 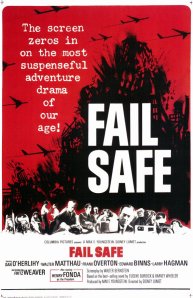 As the cold horror of what is unfolding dawns on America’s top brass, the President (played by Henry Fonda) engages in an increasingly desperate exchange with his Russian counterpart via telephone to find a way to stop the bombers from triggering World War III before it’s too late. 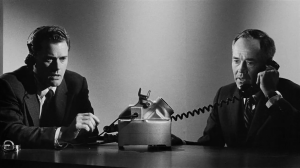 Director Sidney Lumet stages the film in a similar fashion to his 1957 debut 12 Angry Men. The drama plays out in several locations, each of them boiler rooms of fetid tension where the temperature is mercilessly cranked up to the point where a number of characters crack under the strain. Even Fonda’s President loses his cool as the terrible reality of what is happening sinks in.

By doing relatively little with the camera and refusing to pull away, Lumet is able to poison the atmosphere with a thickening dread; so much so that when Larry Hagman’s interpreter’s hands start to shake as he drinks a glass of water we question whether he’s acting or not. 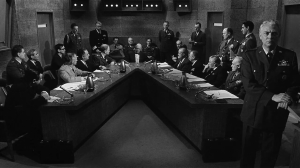 The pressure builds in the War Room in Fail Safe

The only one who seems unphased is Walter Matthau’s coldly analytical civilian advisor Professor Groeteschele, who is seen at the start of the film at a dinner party calmly rationalising how 60 million deaths should be the highest price America is prepared to pay in a war. The ultimate utilitarian, Groeteschele sees the unfolding tragedy as a golden opportunity to wipe Russia off the map to ensure that American culture, whatever’s left of it, survives. Ironically, his uber-hawkish outlook shocks even the most senior military brass.

The film explores the duality we feel towards technology through the banks of dials, buttons and flashing lights at Strategic Air Command headquarters and the imposing screen displaying the whereabouts of military assets and targets across the world. 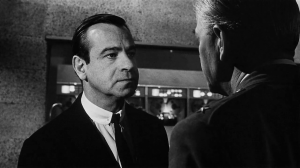 Implicit trust has been placed in the instruments, which General Bogan (Frank Overton) confidently states are so good “they can tell the difference between a whale breaking wind and a sub blowing its tanks”. However, it’s this same technology that betrays us by sending the ‘go code’ to the bombers. We are all of us Dr Frankensteins, Fail Safe implies, courting our own destruction through our insatiable hunger for ever more sophisticated technology (a concept more colourfully explored in the Terminator franchise).

Fail Safe concludes with a disclaimer courtesy of the Department of Defense and US Air Force that safeguards and controls are in place to ensure the film’s events can never come to pass. It’s unlikely that would have made anyone watching Fail Safe back in 1964 any more comfortable in their beds.