If it’s good old-fashioned jingoism you’re after then you’ve come to the right place with Peter Berg’s dramatisation of a US Navy SEAL mission gone bad. 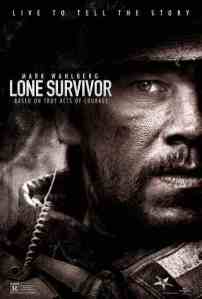 In case you were wondering who the Lone Survivor is…

In case you were wondering who the lone survivor in question is, the film is based on hospital corpsman Marcus Luttrell’s book of the same name. So there you go.

Although the ultimate fate of the four members of SEAL Team 10 tasked with carrying out reconnaissance and surveillance on  bloodthirsty Taliban leader Ahmad Shah in Afghanistan’s Hindu Kush region in 2005 is given away by the title (for those who missed or can’t remember the original story, anyway), it doesn’t stop Berg’s film from largely being an intense, if overly patriotic, experience.

Once the promising director of Friday Night Lights (2004), Berg subsequently turned his talents to blockbuster fare, to the extent that his previous film, 2012’s Battleship, was so dumb it would have made Michael Bay proud. Lone Survivor may contain plenty of action, but it’s of a far more visceral and harrowing nature than what we saw in his last movie.

The film follows the squad – Luttrell (Mark Wahlberg), communications specialist Danny Dietz (Emile Hirsch), sonar technician Matthew Axelson (Ben Foster) and team leader Lieutenant Michael Murphy (Taylor Kitsch) – as they’re dropped into the Hindu Kush and go about tracking down Shah, who’s seen at the start of the film ordering the beheading of an Afghan villager for allegedly helping the Americans, just to stress how evil he is.

The scale of the problem presents itself in Lone Survivor

Things soon take a turn for the unfortunate when they run into a group of goat herders, and truly go up the swanny when they’re ambushed by a small army led by Shah. A mission of stealth and surveillance turns into one of survival (well, for one of them anyway) as they’re forced to take increasingly desperate and dangerous risks to escape.

The film opens with an extended montage of real life Navy SEAL recruits being put through their paces. As well as making abundantly clear just how darned tough these guys are, Berg also uses the footage to emphasise the band of brothers mentality forged among those who are willing to put themselves through such hell. The point is pushed home further courtesy of post-rockers Explosions In The Sky’s stirring soundtrack. Brotherhood is a familiar theme in most war movies, but is particularly accentuated here. 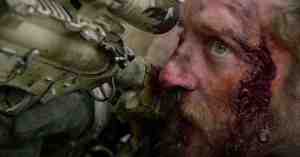 Before Operation Red Wings gets under way (the targets are all named after brands of beer in true US military fashion), Berg works to develop an affininty between the squad and audience. It’s easy to buy Wahlberg and Kitsch as military types because of their previous action man turns, but it takes longer to accept Foster and Hirsch in the roles as it’s such a switch from what they’re best known for. That being said, the group make a convincing enough squad who find themselves in the wrong place at the wrong time.

It takes a good long while before the crap splats the fan, but when it does the film doesn’t let up and Berg reconstructs the prolonged gunfight between the SEALs and Shah’s men with gusto through an effective use of sweaty close-ups, first person perspective, fantastic sound design and convincing acting. It’s chaotic stuff, just as you’d imagine it would have been in real life.

Taliban in their sights in Lone Survivor

What lets the film down, however, is Berg’s insistence on wrapping the men in the Stars and Stripes and painting them as all-American heroes (even going so far as to feature Peter Gabriel’s rendition of David Bowie’s Heroes over stills and footage of those who died in the operation at the end of the film). One soldier’s fate appears to borrow the famous Christ image of Willem Dafoe in Platoon and the use of slow motion in the more emotive scenes borders on crass.

It’s both extremely heavy-handed and unnecessary and takes you out of what could and should have been an absorbing and gut-wrenching story of brotherhood, sacrifice and humanity in the face of grave danger.