Day 4 of the ‘Debuts’ Blogathon, hosted by myself and Chris at Terry Malloy’s Pigeon Coop, and today we welcome the contribution of Cindy from Cindy Bruchman. As Cindy’s site states, she talks about places, movies and books (she’s a published author for goodness sake!). Her film posts spotlight interesting topics and she publishes some really interesting articles. Head on over there and see what I’m talking about.

Clint Eastwood starred and directed Play Misty for Me in 1971.  It was a psychological thriller about a stalker who fell hard for Eastwood’s character, Dave Garver, a disk jockey at a California radio station. Jessica Walter played the pretty fan who calls in when Garver is on the air and requests to hear the jazz song Misty. 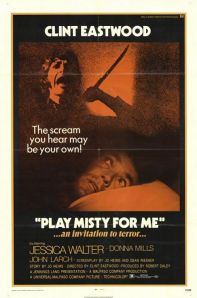 The film popularized the Johnny Mathis version and was Eastwood’s choice for the film and it functioned as an effective contrast. The cozy melody was associated with a sexy, female voice and became the ice breaker in an ‘accidental’ meeting in a bar and the one-night-stand. From there, Evelyn’s harmless personality transformed into a descent into psychotic fury punctuated with the butcher knife that should scare any man from succumbing to the one-night-stand; the plot was revisited in the 1980s version, Fatal Attraction. The confident, soft female who is casual and percolates passion. She lures the man to ecstasy but returns with an emasculating vengeance. 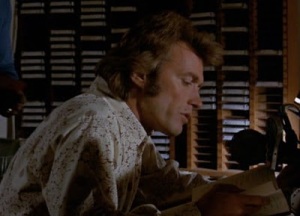 Play Misty for Me was a compelling, low-budget film that made Eastwood millions. As director, the film allowed him a new playground with which to play, and over the years his films employed trademark techniques that have made him one of the most commercially successful directors to date.
As a director, Eastwood’s status has grown to heights rarely seen in the history of movie making. His reputation as a man’s man and his sex appeal – he was 50 when he starred in Play Misty for Me and his filming of the sex scene with Donna Mills at the waterfall showed tasteful eroticism with a romantic sensibility – has wooed women for decades.

His stature grew as a director after winning the Best Director Oscar for Unforgiven (1992). Eastwood owned the 2000s, with Best Director Oscar nominations for Mystic River (2003), Million Dollar Baby (2004), Letters from Iwo Jima (2006) and Gran Torino (2008).
When you watch an Eastwood film, there are similarities in his directing technique. His camera follows the story through the perceptions of one protagonist.  Through sensory variation, his films are beautiful because you see, hear, smell, and touch the setting through the camera lens. This first person telling allows the viewer to share, and therefore, enter the film.

Eastwood loves contrast. He loves to highlight a body part while the rest is in the dark. You will hear the character talking but only see a hand or a shoulder. He likes to use his setting to the max. For example, he will plant signs around the set that enhance the theme of the film. Remember in Million Dollar Baby all the signs in the boxing gym that reiterate key lines such as “Tough Ain’t Enough”, referring to Maggie, who had more heart than anyone on the planet? He likes to simulate the feelings of a character’s emotions with the movement of the camera. If the agonized character expels fury, the camera shoots up the fury to the sky like in Mystic River.

Eastwood films feature misunderstood, strong characters who are alone in their world and rise from adversity. He loves the underdog. He often stars in his films and portrays the grumpy old-man who is trying to survive in a world that has changed too fast. If he isn’t the poster-boy for the angst of baby-boomers, I don’t know who is, for the man is the epitome of a generation when ‘real men don’t cry’ and his surly countenance hides a soft, romantic heart.
This desperado is a universal character and Hollywood’s long-enduring icon. At 83, he’s the manifestation of all his characters. I wish he were my neighbour; we’d listen to jazz music, drink and watch the sunset. I bet his stories are amazing just like his career.
Over at Terry Malloy’s Pigeon Coop, Armando from Film Police has the unenviable task of dissecting David Lynch’s mind-warping debut Eraserhead. Check it out!