Nicholls has quietly positioned himself among the most visionary and essential directors at work today with his striking 2007 debut Shotgun Stories and his belated follow-up, the disturbing and astonishing Take Shelter (2011). 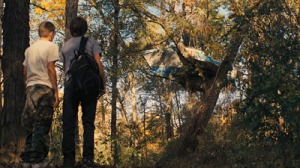 The incredible boat in a tree in Mud

In both Shotgun Stories and Take Shelter, their leading characters (played each time by the mesmeric Michael Shannon) are driven by an almost insane conviction. That same dogmatic approach is adopted by Mud (Matthew McConaughey), the charismatic fugitive living out on a small island in the Mississippi River who befriends inquisitive teenagers Ellis (Tye Sheridan) and Neckbone (Jacob Lofland). Mud has risked his freedom by returning to the area in which he grew up to be reunited with his true love Juniper (Reese Witherspoon), but a group of killers arrive in town looking to avenge a past crime by Mud.

Nicholls has been quick to acknowledge the debt the film owes to Mark Twain’s Adventures of Huckleberry Finn in the overtly Finn/Tom Sawyer relationship between Ellis, who lives on a river boat with his squabbling parents (played by the excellent Ray McKinnon and Sarah Paulson) and Neckbone.

The 14-year-old Ellis is an idealist who’s obsessed with reuniting Mud and Juniper because he believes in the power of love. As young teenagers, the concept of true love can be all-encompassing and Ellis acts with such doggedness in order to counterbalance the failing relationship of his parents. Likewise, he gets a tough lesson in the ways of love courtesy of an older girl he falls for.

The love of Mud’s life, Juniper (Reese Witherspoon) in Mud

Mud brings to mind Terence Malick in its penchant for the Magic Hour (and its fascination with nature) and Nicholls with long-time director of photography Adam Stone captures a string of breathtaking shots. The relationship with Malick doesn’t end there; Mud’s producer Sarah Green worked on The Tree of Life, while Sheridan was given his debut in that film.

He only has a limited filmography, but Sheridan is already showing himself as a young actor with a lot of promise. It’s a demanding role and he brings a lot of maturity to it. All he wants is for people to be happy and for things to be in order, so you can feel his pain when he realises life is much harder to get a handle on.

Maintaining his remarkable career renaissance (aka, his McConaisance), McConaughey is a revelation in the title role. Once the butt of many a joke for his languid, cheque-grabbing performances in duds like Failure to Launch, McConaughey of late has returned to the high watermark he achieved in the likes of Dazed and Confused and Lone Star. Lovelorn, scared, but determined also, his Mud is not so very different from Ellis. 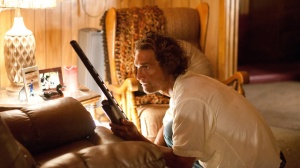 Mud (Matthew McConaughey) tries to save his skin in Mud

The excellent supporting cast includes Shannon as Neckbone’s placid Uncle Galen (as far removed from Take Shelter‘s Curtis LaForche as you can get) and the impeccable Sam Shepard as Tom, who may or may not be a former CIA agent living off the grid in the Mississippi swamps.

Just as Malick managed to capture the coming of age adventure of adolescence in The Tree of Life, so too does Nicholls here. When we see a boat stuck up a tree (Mud’s temporary home), we marvel instead of questioning the unlikelihood of what we’re watching; such is the power of Nicholls’ persuasive vision.

The slightly fumbled ending doesn’t detract from what is a work of true poetry from Nicholls. Much like last year’s Beasts of the Southern Wild, Mud is a real one-off that will stay with you for a long time after.