This review originally formed part of my blog covering the 2011 London Film Festival. Only now has the film finally gained a wide international release.

Mathieu Kassovitz has never quite managed to reach the same heights as his hard-hitting debut feature La Haine (1995). In fact he was fast turning into a hack for hire with such lightweight US genre fare as the terrible Halle Berry ‘shocker’ Gothika (2003) and Vin Diesel-starring sci-fi dud Babylon AD (2008).

Well, Kassovitz is back in France and back to his best with the searing, heavyweight political thriller Rebellion, which chronicles an incident in 1988 in the French colony of New Caledonia when 27 hostages were taken by a group of indigenous guerilla fighters seeking independence, and the bloody military rescue operation that subsequently took place.

The French forces round up the ‘insurgents’ in Rebellion

Kassovitz films the drama through the eyes and experiences of Philippe Legorjus (played by the director himself), a Captain with the French GIGN counter-terrorist special forces, which were called on to assist the army with tracking down the ‘insurgents’ and freeing the hostages.

Legorjus and his men are primarily trained to deal with hostage-takers through negotiation, but the Captain quickly gets the impression that talking isn’t the number one goal of the military brass and French minister Bernard Pons (Daniel Martin), especially when there’s a presidential election taking place in France and incumbent President François Mitterrand and his opponent Jacques Chirac are trying to out-do each other over their tough stances on the unfolding crisis.

Legorjus nevertheless tries to make contact with the group holding the hostages and succeeds after he is himself taken hostage. He wins the hard-earned trust of leader Alphonse Dianou (Iabe Lapacas) and is set free, promising to do what he can to give the group a platform in which to put their case for independence forward.

With the situation still tense, Legorjus works around the clock trying to convince the powers that be that the hostage-takers are willing to negotiate, but keeps running into brick walls until time runs out and a full military assault is ordered. With no time left, Legorjus realises he must betray Dianou’s trust in an effort to save as many of the hostages as he can. 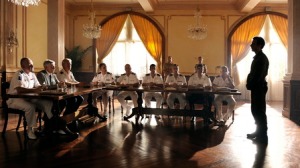 The military brass in full effect in Rebellion

Counting down over the course of 10 days until the dramatic, bloody assault on the cave where the hostages are being held, there’s a growing sense of inevitability that Legorjus is fighting a losing battle.

There are pointed remarks sprinkled throughout the film as to where this path is headed; when Legorjus tells a lawyer living on the island that the order to attack has been given, he asks the captain incredulously “the government wouldn’t do that would they?”. Another moment comes earlier in the film when Legorjus reminds his men that the population of New Caledonia are officially French citizens and therefore not ‘the enemy’. Needless to say these words ring hollow later in the film.

Thought-provoking and provocative, the anger of the film seeps out of every frame. This is brave, prescient film-making of the highest order.