There’s a moment in the seedy, southern-fried gothic noir The Paperboy when Nicole Kidman urinates on Zac Efron to relieve his character’s painful jellyfish stings. 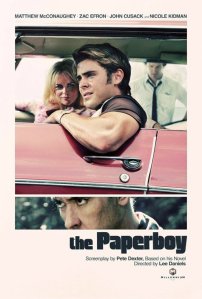 It’s a bizarre scene in a frankly head spinning film that comes across as a jubilant two-finger salute by its director Lee Daniels.

Measured alongside his previous film, 2009’s Precious (which earned him a Best Director Oscar nomination), it’s fair to say Daniels has something of the bull in a china shop approach about him and a keen eye for a headline-grabbing project.

Based on Pete Dexter’s novel, The Paperboy exudes a clammy, twisted luridness that would have had Tennessee Williams choking on his iced tea and a roll call of characters that make the buck-toothed Hillbillies of Deliverance look like boy scouts.

Ostensibly, it deals with investigative reporter Ward Jansen (Matthew McConaughey) returning to his Florida hometown with partner Yardley Acheman (David Oyelowo) in tow to try to prove death row convict Hilary Van Wetter innocent (John Cusack) of the local sheriff’s murder. Ward has been coaxed into it by vampish “over sexed Barbie doll” Charlotte Bliss (Kidman), a green mile groupie who’s formed a bond with Van Wetter, and teams up with his younger brother Jack (Efron) to drudge through the murky swamp waters of the case. 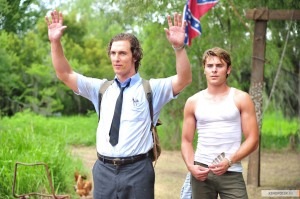 However, what starts out as a straightforward enough crime drama very swiftly gets churned up in the film’s wild vortex as its uncomfortable events play out.

While much of the attention and hoo-ha has been directed at the urination scene, there’s plenty else to get more innocent viewers squirming in their seats, including a ludicrously trashy moment when Bliss mimes a sex act for Van Wetter during visiting hours in front of a dumbfounded Ward, Jack and Acheman. It’s so ridiculous – and so sleazily filmed by Daniels – that you end up chuckling at the sheer brazenness of what you’re watching. 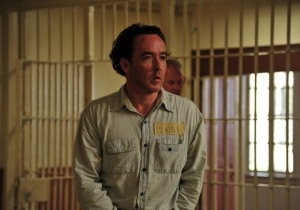 The film is narrated by the Jansens’ housemaid Anita (singer Macy Gray), who can barely disguise the contempt she has for her racist employers. She clearly feels protective toward Jack, however, and Daniels emphasises this when a sex scene involving him is cut short when she suggests “I think you’ve seen enough”.

A few exceptions aside (there’s something off about Gray’s performance in particular), a starry cast work their socks off. In her most outlandish role to date, Kidman somehow keeps a straight face throughout, a feat unto itself bearing in mind what’s expected of her.

Cusack has a great time chewing the scenery and playing against type as the reddest of rednecks, while Efron is a million miles from his High School Musical days (and all the better for it) and McConaughey continues the ‘McConassance’ (not my pun mores the pity) he’s been enjoying of late in such fare as The Lincoln Lawyer, Magic Mike and Killer Joe.

Set in the 1960s, the film uses a grainy lens and many of the visual tricks adopted at the time to give the film a suitably authentic look. At its best, The Paperboy brings to mind the twisted lunacy of Scorsese’s remake of Cape Fear and the woozy, hallucinatory nature of Night Of The Hunter, but in choosing to turn the dial up to 11 Daniels ends up losing the plot as the narrative gets sucked into the swamp and the whole endeavour takes leave of its senses.

There are many things to admire about The Paperboy, not least of which its sheer weirdness, but what in the hands of a David Lynch or Luis Buñuel could have been a real strength ends up here being the film’s most damaging weakness as you’re left scratching your head wondering whether it was all worth the bother.