The poster for Robert Zemeckis’ first foray into live action filmmaking for a dozen years captures everything that’s good – and not-so-good – about Flight. 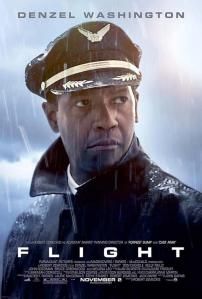 Denzel Washington’s airline pilot ‘Whip’ Whitaker conveys an authority befitting his vocation, but the rain pouring down suggests something is very wrong.

It’s a simple image that tells you all you need to know about the film. At its core is a towering central performance of one man’s painful journey towards redemption, but that odyssey is marred by a style of direction that’s about as subtle as taking a sledgehammer to crack a walnut.

The signs are there from the first few moments when flight attendant Katerina (Nadine Velazquez) wanders naked around the hotel room she’s sharing with lover Whitaker after a heavy night on the booze to the strains of the Barenaked Ladies’ Alcohol. Then, after a pick-me-up and a snort of cocaine a swaggering Whitaker emerges from the room with Joe Cocker’s Feelin’ Alright playing in the background. 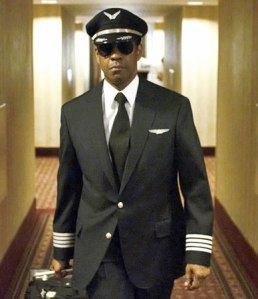 Whip Whitaker (Denzel Washington) prepares for take off in Flight

This clumsiness is further compounded when the plane Whitaker miraculously pilots symbolically clips the top of a church before it crash lands, killing six (including Katerina) but crucially saving almost 100 other passengers and crew.

Zemeckis has proven himself a master filmmaker of the plane crash following 2000’s Cast Away (his last live action film), which showed it from the terrified perspective of Tom Hanks’ Chuck Noland. Here, we see the action from the cockpit as Whitaker confidently takes charge and rolls the plane upside down to bring it out of a nose dive. It’s heart-pounding stuff that will have you on the edge of your seat. 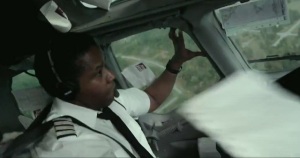 He’s saluted as a hero by both the media and friends, including union rep Charlie Anderson (Bruce Greenwood) and his flamboyant dealer Harling Mays (John Goodman), whose musical cue is the Rolling Stones’ Sympathy For The Devil lest we forget his chosen profession. But Whitaker’s world begins to crumble when he discovers a blood sample was taken in hospital which, if it were to become public would reveal he was drunk at the controls and land him in jail. 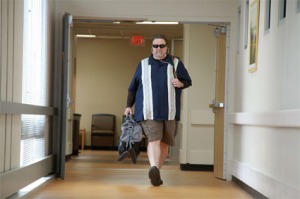 It’s an intriguing story, extremely well scripted by John Gatins that has you rooting for an anti-hero who isn’t just flawed, but plain unlikable for stretches. It also examines the lengths people and corporations will go to distort the facts to maintain a story so long as it has a happy ending, while also pointing a finger at the media for endlessly speculating and editorialising when there’s little or nothing to report. 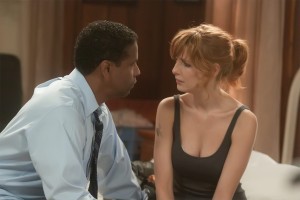 Whitaker is that familiar movie cipher, the flawed genius, but Washington in his best performance since winning an Oscar for 2001’s Training Day (an equally unlikable role) adds layers of nuance to give us one of the most expressive and fascinating portrayals of functioning alcoholism yet seen on screen. 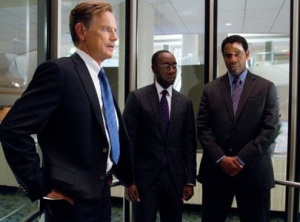 Furthermore, Flight asks the uncomfortable question of whether it’s the drink and drugs that bring out the real brilliance in Whitaker; the film certainly seems to suggest so.

Goodman’s blunderbuss performance is out-of-place and more in keeping with his Walter Sobchak from The Big Lebowski, although Don Cheadle is excellent as the morally dubious lawyer trying to paper over the cracks and Brit Kelly Reilly does a lot with a thin role as a heroin addict who Whitaker befriends after meeting in hospital (just in case we didn’t know she’s an addict, the Red Hot Chilli Peppers’ drug anthem Under The Bridge helpfully plays on the soundtrack).

In many ways Flight is a welcome return to the ‘real’ world for Zemeckis following his triumvirate of motion-capture uncanny valley animations The Polar Express, Beowulf and A Christmas Carol, but in his zealousness for proper, adult drama he serves up a film so heavy-handed in its use of symbolism and music he almost ruins it.