Natural disasters are invariably so enormous in their scale the only way to avoid them becoming too overwhelming on screen is to chronicle the unfolding tragedy through the eyes of a small group of people.

“There are powerful moments, but too few and far between to elevate The Impossible into the awards contender is clearly aims to be”

The Indian Ocean earthquake and resulting tsunami that struck on Boxing Day in 2004 claimed the lives of more than 230,000 people, many of them in south-east Asia.

The scale of the catastrophe boggles the mind, so much so that Juan Antonio Bayona’s The Impossible seeks to narrow its focus by having the desperate plight of one stricken family symbolise the horror and anguish of those fateful days.

This isn’t the first film to deal with the tsunami; the HBO miniseries Tsunami: The Aftermath was screened less than two years after the tragedy. In spite of winning a cabinet full of awards, it drew criticism for leaning too heavily on the stories of white victims at the expense of the native population.

A similar charge has also been levelled at The Impossible, which exclusively follows the Bennett’s – Henry (Ewan McGregor) and Maria (Naomi Watts) and their three sons, teenager Lucas (Tom Holland), middle child Tomas (Samuel Joslin) and youngest Simon (Oaklee Pendergast) – a white English-speaking family who are on holiday in Khao Lak, Thailand when the wave hits.

You know what’s coming, which makes the opening scenes of peaceful tranquility and tropical beauty all the more suspenseful. Although you’re left in no doubt this is a story of survival and the tenacity of the human spirit in the face of overwhelming odds, The Impossible will inevitably be judged by its audience for the way the tsunami itself is portrayed on screen. 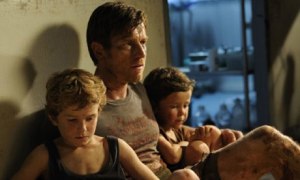 In this, Bayona pulls out all the stops. Just as Steven Spielberg leaves you shell-shocked with his opening D-Day landing sequence in Saving Private Ryan, so too does Bayona, who pounds you into submission by showing the full, awesome power of nature as the tsunami tears through the resort, scoops up those in its path and tosses them around in the torrent of water like rag dolls before finally subsiding.

The terrifying moment the tsunami strikes in The Impossible

It’s a terrifying, dizzying sequence that serves as the launchpad for the rest of the movie as a badly injured Maria and determined Lucas must rely on the selfless generosity of the Thai people to get them to safety, while Henry, with Tomas and Simon in tow, begins a desperate search to reunite his family.

The problem with The Impossible is that the devastating impact of the tsunami is so powerfully depicted it proves impossible for the remainder of the film to match what has gone before (akin to Saving Private Ryan). Much of the blame for this must be levelled at Sergio G. Sánchez’s script, which falls back on heavy-handed symbolism and, in its closing minutes resorts to ham-fisted melodrama that’s as unnecessary as it is manipulative.

It’s a pity as the cast are largely superb. Holland is a real discovery and shows a maturity well beyond his years in his portrayal of the resourceful son who goes through hell and (literal) high water to help save his mum. McGregor gives his best performance for years as a father and husband wracked with guilt and fear at the thought of losing his wife and family.

Bayona leans on Watts to deliver much of the emotional payoff and she doesn’t let her director down. It’s a draining performance, both physically and psychologically as we see Maria fighting to survive for the sake of her family. Bayona made his name as a horror director in the excellent Spanish-language The Orphanage and he brings that same sensibility to the moment when an exhausted, ailing Maria experiences the sting in the tsunami’s tail.

Although based on the experiences of a Spanish family, Bayona has come under fire for making them English-speaking. Setting aside the director’s rather unconvincing explanation that he chose not to specify their nationality in order to make The Impossible as universal as possible (it’s pretty obvious they’re supposed to be British), the fact they aren’t Spanish doesn’t detract from the story the film is telling.

There are powerful moments (the telephone call made by Henry to a relative back home is gut-wrenchingly played by McGregor), but too few and far between to elevate The Impossible into the awards contender is clearly aims to be.