To paraphrase the title of his debut picture, you can count on Keneth Lonergan to deliver the kind of quietly devastating domestic drama that all-too-rarely graces our screens.

It’s a sad fact that Manchester By The Sea represents only the third feature from Lonergan in the past 16 years. While You Can Count On Me (2000) was a critical success and turned a profit, his belated follow-up Margaret endured the sort of tortuous journey to release that normally goes with most Terry Gilliam films.

Eventually seeing the light of day in 2011, Lonergan’s originally conceived three-hour version of Margaret was finally released in 2012 and further elevated the writer/director’s status as one of America’s most compelling cinematic voices. 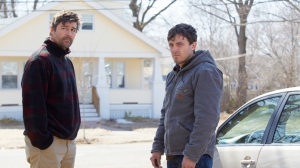 The wait for this third feature has, thankfully, been considerably shorter and it’s once again filmmaking of the highest calibre, telling a wrenching drama about the debilitating effects of guilt, regret and remorse on people’s lives.

Casey Affleck plays Lee Chandler, an insular figure working a simple routine as a janitor whose blunt conversations with other people tend to be either matter-of-fact or, in the case of a needless bar brawl, self-destructive. His withdrawal from the world, mixed with his seeming need to be punished suggest a pain and darkness in Lee’s past that slowly reveals itself when he is forced to return to his childhood home of Manchester-by-the-Sea upon discovering that his brother Joe (Kyle Chandler) has died.

This fresh trauma compounds a tragic event from his recent past that rears itself in Lee’s mind due to having returned home, while he also discovers that he’s been made sole guardian for Joe’s teenage son Patrick (Lucas Hedges).

Manchester By The Sea could so easily have embraced the same tropes that afflict countless ‘aw-shucks’ Hollywood melodramas whereby the central character overcomes adversity to find redemption and a happy-ever-after ending. That, however, isn’t how life works most of the time and Lonergan is to be applauded for resolutely sticking to his guns when it comes to the narrative path trodden by the film.

Lee is a damaged soul still in limbo from the tragic events that ultimately destroyed his marriage to Randi (Michelle Williams) and his return home is emotionally traumatic. Lonergan’s honest and complex screenplay about a mentally scarred figure haunted by the ghosts of his past never rings false and Affleck’s career-best performance is a masterclass in understatement right until the final scene.

There are no big emotional outbursts here, no Oscar-bait speeches, rather the film slowly and deliberately observes Lee and Patrick as they try to work out a way forward following a death in the family. Sporadic flashbacks serve as memories to what came before, in particular a series of heartbreaking scenes that unravel the devastation that befell Lee and are held together by Lonergan’s inspired use of Tomaso Albinoni’s overwhelming Adagio Per Archi e Organo in G Minor.

While Affleck shines, he’s supported by a stellar cast who don’t squander the material they’ve been given. Hedges is entirely believable as an imperfect, but good 16-year-old kid who isn’t yet emotionally mature enough to fully deal with what life has thrown at him. As such, Patrick makes some foolish decisions, but the bond he gradually forms with Lee is central to the narrative and, like the rest of the film, has a truthfulness that never feels forced.

Williams also makes an impact in the limited time she is on screen, in particular during an agonising exchange late on with Affleck which underlines just how much collateral damage has been caused to both their lives.

Lonergan’s Manchester By The Sea is a work of genuine profundity, an all-too-human tale that leaves its mark on the soul long afterwards.