After revealing what a house full of vampires get up to in their spare time, Taika Waititi follows another set of mismatched misfits to equally hilarious effect in this perfectly judged boy’s own adventure. 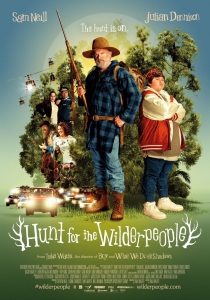 The “Magical” Hunt For The Wilderpeople

Whilst Peter Jackson’s Lord Of The Rings no doubt remains the New Zealand Tourist Board’s favourite cinematic advert, Hunt For The Wilderpeople’s loving immersion in the land of the long white cloud’s unspoilt greenery is equally majestic.

This forms the stunning backdrop to an adventure that’s as fantastically offbeat as it is heart-warming; one which gives us 2016’s best buddy pairing in the form of Sam Neill’s prickly hunter Hector and Ricky, the hip hop-loving wannabe gangster played to charming effect by newcomer Julian Dennison.

Hec (Sam Neill), Ricky (Julian Dennison) and the beautiful NZ scenery in Hunt For The Wilderpeople

Ricky is a rebellious foster kid relocated from the city by child welfare services (led by Rachel House’s frightening looking Paula – “no child left behind”) to the country and into the arms of the loving Bella (Rima Te Wiata) and the less interested Hec (Neill).

When a series of unfortunate events sees Ricky and Hec (with dog in tow) go on the run, their begrudging tolerance of each other slowly transforms into something approaching a father and son relationship as they continue to evade the authorities while camped out in the great outdoors. 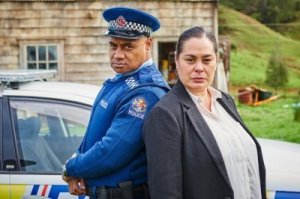 No child left alone: Andy the police officer (Oscar Kightley) and ‘Child Services’ (Rachel House) in Hunt For The Wilderpeople

Anyone with even a passing appreciation of 80s adventure flicks such as The Goonies will soon attune themselves to Hunt For The Wilderpeople‘s wavelength and the warm glow of nostalgia that comes with it. The references don’t stop there; Waititi has acknowledged the debt he owes to the likes of Paper Moon and Pixar’s Up, as well as numerous less well-known Australian movies of the 1980s.

The boy’s own wistfulness of the criminally underseen Son Of Rambow and Kings Of Summer have mined similar territory in recent years, but there’s an extra edge that plays out in the back and forth between Ricky and Hec.

Waititi has developed considerably as a director and the choices he makes with the camera are both confident and eye-catching in a fashion not dissimilar to Wes Anderson and Edgar Wright. Married to Lachlan Milne’s cinematography, the film looks beautiful.

Taika Waititi as a surreal minister in Hunt For The Wilderpeople

The surrealism present in so much of Australasian cinema can be found coursing through the veins of the movie, whether it be the hilariously odd supporting cast (including Waititi as a curious looking minister and Rhys Darby as Psycho Sam, a conspiracy-spouting hermit who disguises himself as a bush) or numerous visual choices, including a sweet moment when Ricky meets and instantly falls for Tioreore Ngatai-Melbourne’s Kahu and is reminded of an old Cadbury’s Flake advert when she gets on her horse.

The shamelessly over-the-top finale (reminiscent of Thelma And Louise) may be a little much, but there are plenty of asides that only a Kiwi or Australian would fully appreciate, such as the references to food such as scroggin (a type of trail mix) and burger rings, as well as some of NZ’s more colourful TV personalities.

As Waititi moves up to the big leagues of Marvel for his next venture, one can only hope the magic of Hunt For The Wilderpeople will continue to rub off on this talented cinematic voice.