It’s day two of the Decades Blogathon – 6 edition – hosted by myself and the one and only Tom from Digital Shortbread (check out his site by the way – that boy can write). The blogathon focuses on movies that were released in the sixth year of the decade. Tom and I will run a different entry each day (we’ll also reblog the other’s post); and this excellent review of Darren Aronofsky’s The Fountain comes from Jenna and Allie’s site Flick Chicks.

I was a spectator for last year’s Decades Blogathon, so I am absolutely delighted to make the cut to take part this year! As someone with a worryingly long ‘must watch’ list, this was the perfect chance to tick off a movie that I’ve been putting off for a while. The Fountain (2006) has been on my list for a while now. I can’t remember exactly what first brought my attention to it, but I was fascinated by the mixed opinions on it. Simply look at the chart on Letterboxd here to see what I mean. There aren’t many ratings charts that look like that.

The Fountain is an incredibly artistic and complex movie, but in its most simplest form it is the story of a scientist named Tommy (Hugh Jackman) desperately trying to find a cancer cure for his dying wife Izzi (Rachel Weisz).

It is, of course, much more than that. There are actually three separate stories here, all woven intricately within each other. For the first half of the movie, it’s incredibly easy to get confused with the stories and the timeline itself. There are so many perplexing details that the movie focuses on that it’s hard to switch off and simply enjoy the story for what it is. Rest assured, all those questions you build up get answered in a drip feed as the time goes by.

In fact, it’s incredibly rewarding to see such tiny details explained such a long time afterwards. It’s really one of those rare movies where nothing is shown or said without a purpose,and I like that. My one piece of advice actually would be to stick with this if you find it getting a bit too much. If it wasn’t for the fact I was watching this for the Decades Blogathon, I can’t confidently say I would have watched the whole thing.

What lies beneath these intricate tales is one of the most heartbreaking yet beautiful love stories I’ve ever seen. It’s a real testament to both Hugh Jackman and Rachel Weisz for their amazing acting skills and natural chemistry together. Izzi’s battle with cancer is all too familiar and Tommy’s refusal to accept the reality in front of him was so difficult to watch. The name of the movie comes from the book that Izzi has been writing as she documents her journey and the scene in which she asks Tommy to complete the final chapter for her because he “knows how it ends” is a very memorable one. 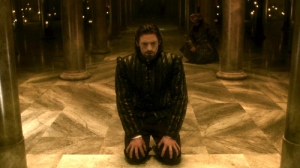 My only real complaint is that the spiritual elements of the movie just get too complicated for me to understand. A second viewing might aid this as I literally went in blind, whereas knowing even just the blurb on IMDb would have probably helped me greatly. That said, anyone who is naturally interested in spirituality will have an amazing experience with this. It’s so well done and considering the fact that it’s 10 years old now it hasn’t aged at all. If it weren’t for the famous faces in the lead roles this could easily be mistaken for a current release.

With a runtime of a little over an hour and a half this movie whizzes by and the ending comes all too soon. That said, I think if this was any longer some might give up before the end, when all their questions are finally answered. I highly recommend The Fountain, but I accept that it isn’t one for everyday viewing.