Welcome to the first entry in the Decades Blogathon – 6 edition – hosted by myself and Tom from Digital Shortbread. The blogathon focuses on movies that were released in the sixth year of the decade. Tom and I will run a different entry each day (we’ll also reblog the other’s post); and the first of my entries comes from Mark via the excellent Movie Man Jackson.

It, for her, means sex – and not just sex with one guy. In Nola’s case, she’s having it with three guys: the rigid but good-natured Jamie (Tommy Redmond Hicks), the conceited yet cultured Greer (John Canada Terrell) and the pint-sized yet hilarious Mars (Spike Lee). 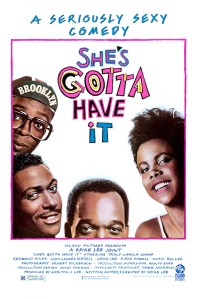 Each man offers something different, which is why she is unable to commit to only one. Eventually, each guy gets tired of being a spoke in the wheel and each man is ready for Nora to be his sole queen. But is Nola ready?

Nowadays hearing the name Spike Lee doesn’t exactly inspire the best of thoughts, at least for yours truly. That’s not to say that he’s a bad guy, or terrible at his craft. I just feel like now, in the 21st century, one doesn’t necessarily think of his films, but rather, the individual. I’d be willing to bet that most people today, this blogger included, think about Spike Lee the New York Knicks fan, or outspoken political – sometimes to a fault – activist, rather than director. 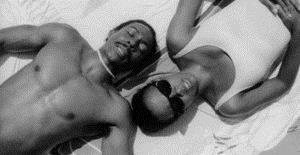 Aside from an obvious reference to another movie in which leads to a transition in colour, it is filmed primarily in black and white with what appears like a decision based purely on cost (reportedly $185,000). But, the aesthetic decision adds to the film’s style, as well as the jazzy soundtrack and it being actually shot in Brooklyn. Even the sex scenes are shot with so much precision and care and help to see how the main character can find so much pleasure in the act.

Even though 1986 was a few years removed from the inundation of blaxploitation movies on the market, it was still a fairly big surprise to see a movie featuring nothing but black individuals in a setting that wasn’t a plantation or a ghetto. Lee’s characters, while not necessarily of great depth, are not entirely one-note, either. 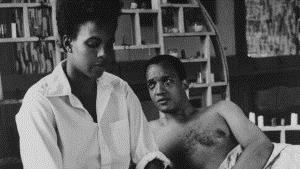 Through a documentary setup used at choice times, Spike allows the main characters to reveal a bit more about themselves than what would be afforded if it weren’t used. While this choice isn’t flawless in execution and sometimes looks as if the actors are reading off of cue cards, this does forward the story enough and provides context to what is happening on screen. As an aside, it does leave to some humorous moments especially with Mars, played by Spike himself, who provides laughs at the right times in what could be a dull affair without it.

Written by Lee himself the screenplay, dealing with the essential themes of love versus lust and by extension, monogamy versus polygamy (minus the marriage) is simple, but fairly profound. Are humans designed to be with only one mate? Is it a bad thing for a woman to be with multiple partners? Why is it that males are thought of as studs and women whores when the situations are exactly the same?

Perhaps the strongest aspect of Spike’s screenplay is his neutrality, as his beautiful final shot leaves it up to the viewer to determine if Nola is in the right or wrong, content or dissatisfied with her decision.