Alfred Hitchcock may sadly no longer be with us, but the Master of Suspense would surely have approved of this absorbing psychological thriller. 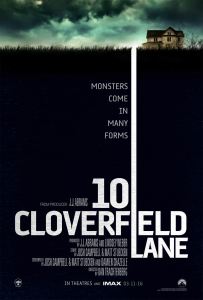 So what next for this cross-genre film series after 10 Cloverfield Lane? A romantic comedy? Film noir? Either way, count me in

It’s impressive in this day and age to produce a movie that’s so far under the radar it’s mysterious and intriguing trailer is pretty much all that anyone really knows about it prior to release.

The fact that it was renamed 10 Cloverfield Lane (developed from a script called The Cellar) and was touted as existing in the same universe as Cloverfield (2008) only served to whet the appetite even further. 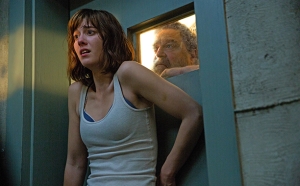 While its association with Matt Reeves’ found footage creature feature (it’s been deemed a “blood relative”) has no doubt helped to raise the profile of what would otherwise have been a low-budget thriller, the move courtesy of marketing puppet master J.J. Abrams could so easily have backfired had Dan Trachtenburg’s debut feature not been as smart and tightly wound as it is.

Indeed, 10 Cloverfield Lane stands very firmly on its own two feet thanks to a confident narrative that’s as compelling as it is suffocating and uniformly excellent performances from its terrific trio of actors.

Mary Elizabeth Winstead plays Michelle, who awakes from a nasty car accident to find she’s confined to an underground bunker owned by Howard (John Goodman). Howard claims that, rather than being her captor, he’s actually saved her from an apocalyptic event that has turned the outside air toxic; an assertion given credence by Emmett (John Gallagher Jr). However, is everything it seems to be; both inside and outside the bunker?

The Hitchcock homage is present from the first shot of the film – Michelle hurriedly packing a case and leaving town is straight out of the opening of Psycho (1960), while it’s no accident that Bear McCreary’s jittery score invokes Bernard Herrmann.

Likewise, the air of paranoia, mistrust and switching sympathies was present and correct in much of Hitch’s work, while the (mostly) single location brings to mind the psychological suspense of Rope (1948).

Goodman once again proves why he’s one of the most versatile characters actors at work today, delivering a performance that veers between creepy, sinister, misunderstood and sympathetic. Goodman’s imposing physical presence is often juxtaposed with a softness of touch that makes you question whether he’s nuts, canny or both.

Gallagher Jr also brings his A-game, playing a nice-but-somewhat-dim former jock who once had the chance to escape the clutches of his small town but chose to stay put (a nice analogy of his present predicament).

What’s that? Godzilla’s up there?

Winstead, meanwhile, is excellent as Michelle, a refreshingly resilient ‘final girl’ who makes smart, informed choices and proves herself to be far stronger than she first thought. A nicely played exchange with Emmett (in which the characters have their backs to each other whilst being separated by a concrete wall) reveals more about Michelle’s inclination towards flight rather than fight and is brought to mind during a pivotal moment at the very end of the film.

Trachtenburg weaves in plenty of neat touches, including a cute montage of the trio playing the perfect nuclear (bunker) family, which highlights the absurd ‘normality’ of their situation and is nicely reminiscent of the playful ‘life goes on’ montage amid the devastation of the outside world in Dawn Of The Dead (1978).

So what next for this cross-genre film series? A romantic comedy? Film noir? Either way, count me in.