Shakespeare’s Scottish play has had a long association with the big screen spanning more than a century, with some adaptations more tragic than others.

The Scottish play has never have looked so eerily cinematic, but the sound and fury at the savage heart of Kurzel’s vision fails to truly lift off the page, denying this Macbeth a place among the truly great screen Shakespeares

Alongside the more traditional imaginings of the Bard’s timeless tale of treachery, misguided ambition and revenge – most notably Orson Welles’ 1948 offering and Roman Polanski’s celebrated 1971 depiction – Macbeth has, like so many of Shakespeare’s plays, also lent itself to more dynamic adaptations, in particular Akira Kurosawa’s masterful Throne Of Blood (1957), which transposes the setting from the Scottish highlands to feudal Japan.

This latest conceptualization, courtesy of Australian director Justin Kurzel, is arguably the most visually arresting Macbeth yet seen on screen. 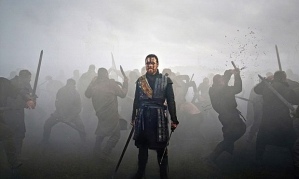 Michael Fassbender has his 300 moment in Macbeth

Whilst Mel Gibson’s Braveheart (1995) has been invoked, presumably more for the use of war paint, while the slo-mo combat brings to mind Zack Snyder’s battle-porn 300 (2006), the film that most resembles Macbeth, both in its brutally beautiful visual style and tone is Nicolas Winding Refn’s underseen Valhalla Rising (2009).

Working with Director of Photography Adam Arkapaw again following their collaboration on Snowtown (2011), Kurzel shrouds many of the early scenes in an eerie mist that pours over the unforgiving landscape and symbolises the confusion and madness that takes hold, while later scenes resemble Dante’s Inferno, with a hellish blood-red palette engulfing the characters.

This militarised adaptation, all shock and awe, is scored to suitably portentous effect by Kurzel’s brother Jed, with a generous use of drums that sound like distant explosions drawing ever closer.

Whilst there can be no denying Macbeth‘s visual impact, the film’s greatest strength also, inversely, becomes its most pronounced weakness as it comes to dominate everything and takes away from the work being done by Michael Fassbender’s title character and his supporting cast.

Fassbender and Kurzel have spoken of their Macbeth as being the victim of post traumatic stress disorder, left hollowed out by the soulless savagery of war and the loss of a child. Instead of playing this in an exaggerated fashion, Fassbender instead internalises his pain; however, this more introspective portrayal of the King of Scotland can get drowned out by everything else going on.

Marion Cotillard makes some interesting choices as Lady Macbeth and the overly ambitious malevolence found in so many other portrayals is stripped back here, but her character’s slide into madness feels rushed and inauthentic and a lack of chemistry with Fassbender means it can be difficult to buy into their relationship.

On a more positive note, Sean Harris strikes the right note as Macduff, while Paddy Considine does a lot with what he’s given as Macbeth’s man-at-arms Banquo.

The Scottish play has never have looked so eerily cinematic, but the sound and fury at the savage heart of Kurzel’s vision fails to truly lift off the page, denying this Macbeth a place among the truly great screen Shakespeares.