In a summer that’s seen a car traverse skyscrapers and a woman in high heels managing to outrun a Tyrannosaurus Rex, the sight of Tom Cruise clinging onto the side of a plane as it takes off should be the most ridiculous of them all.

Finding the right balance of engaging espionage and flat-out action, Mission: Impossible – Rogue Nation is a Cruise missile that really delivers the goods

That Cruise insisted on doing his own stunt speaks to the star’s commitment to a franchise that has outlasted most actor’s entire careers.

John Woo’s dated and misjudged 2000 M:I 2 aside, each of the Mission: Impossible movies has forged its own identity and brought something different to a genre that’s well endowed with memorable figureheads. 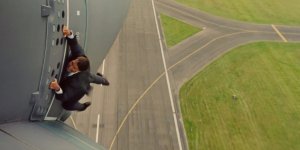 A big reason for this is because each film is helmed by a different director and in Rogue Nation it’s Christopher McQuarrie’s turn to sit in the big chair. His association with Cruise can be traced back to Valkyrie (2008) and the pair have worked together numerous times since, most recently in 2012’s so-so Jack Reacher (McQuarrie’s previous film as director) and in the underappreciated Edge Of Tomorrow (2014), which McQuarrie wrote.

That partnership bears fruit in M:I 5, which sees Ethan Hunt (Cruise) and his cohort of fellow IMF-ers Benji (Simon Pegg), Luther (Ving Rhames) and Brandt (Jeremy Renner) going up against the Syndicate, a SPECTRE-like terrorist consortium that wants to bring Hunt down almost as much as CIA Director Hunley (Alec Baldwin) does. As Hunt tries to get to the bottom of who and what the Syndicate are, he encounters the mysterious Ilsa Faust (Rebecca Ferguson), an agent seemingly working for both sides.

The one area the M:I franchise has struggled with most has been with its villains, so it’s pleasing that in the Syndicate and its nefarious leader (played with psychotic calm by Brit Sean Harris) Hunt finally faces an opponent that is his match.

Where Mission: Impossible has never struggled has been in its set pieces and Rogue Nation delivers some of the best blockbuster action you’ll see all summer. The much-hyped plane dangling sequence would be the climax of most action movies, but here it’s merely the preamble for what’s to come; a rip-roaring adrenaline shot that Bond would be proud of.

While the prologue has garnered the most attention, the film’s best set pieces take place later in the film, the first and best being a stand out and nail-biting sequence at the Vienna Opera House that invokes Hitchcock’s The Man Who Knew Too Much and is soundtracked to suitably dramatic effect by the performance of Puccini’s Turandot taking place inside the hall. A later sequence involving an underwater break-in a Moroccan power station may not be as strong as the Langley infiltration from Brian De Palma’s 1996 original, but it’s the sort of material the Mission: Impossible franchise does so well.

While his personal belief system may be just this side of loony tunes, it’s hard not to be won over by Cruise the performer and once again he’s up to the task. Quite how long he can kep putting his aging body through the rigors that such a film as this demands is anyone’s guess, but for a guy who’s now settled into his early fifties, he handles himself as well as he did back when the franchise kicked off almost 20 years ago.

Mission: Impossible should never just be about Ethan Hunt, though and it’s good to see his co-stars getting a fair crack of the whip (Rhames’ Luther aside), most notably Ferguson who gives a star-making turn as an ass-kicking agent who can look after not only herself but Hunt too and has the wherewithal to take off her high heels when serious running is required.

Finding the right balance of engaging espionage and flat-out action, Mission: Impossible – Rogue Nation is a Cruise missile that really delivers the goods.