The smallest superhero on the block finally crawls onto the big screen – but is it an import-ant addition to the Marvel Cinematic Universe or just p-ants?

There’s enough potential here for a fun and unpretentious franchise; Ant-Man proves that good things can come in small packages

The knives were being sharpened by many for Marvel’s latest when Edgar Wright, who had been attached to the project before The Avengers was a glimmer in head honcho Kevin Feige’s eye, left the project due to reported ‘creative differences’ and garnered plenty of sympathy in the process.

As is Marvel’s wont, the studio again went against convention by hiring the little known Peyton Reed, whose biggest hit until now had been the forgettable Jim Carrey vehicle Yes Man (2008) (he also helmed 2006’s The Break-Up; another one of Vince Vaughn’s painful ‘comedies’).

Bearing in mind the tight schedule Reed inherited to meet the film’s summer release date – as well as the fact its star Paul Rudd and Anchorman‘s Adam McKay weighed in on Wright and Joe Cornish’s initial script – it’s pleasantly surprising how well Ant-Man holds up.

The story itself is relatively lean. Newly released prisoner Scott Lang (Rudd) finds himself unwittingly recruited by former S.H.I.E.L.D super-scientist Hank Pym (Michael Douglas) to inherit the mantle of  the Ant-Man. Lang dons the suit and is trained by Pym and his estranged daughter Hope van Dyne (Evangeline Lilly) to properly use the powers inherent in the Ant-Man suit in order to stop Pym’s former protégé Darren Cross (Corey Stoll) from perfecting his own miniaturizing suit – the Yellowjacket – and using it to revolutionise warfare. 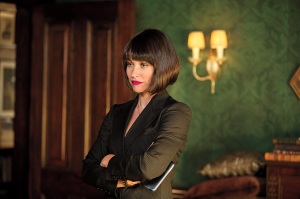 After the excessive bombast of Avengers: Age Of Ultron, it’s refreshing to watch a Marvel movie that manages to avoid its now familiar epic final act with something that, logically in this case, is much smaller in scale. Instead of duking it out on a giant airship or throwing a nondescript foreign city up in the air, Ant-Man‘s final battle takes place in the far more modest surroundings of a suburban house (involving a genuinely inventive and amusing train sequence).

The film also manages maintain a light and breezy tone in spite of the studio’s usual shenanigans; poking fun at the concept of a man being able to zap himself down to the size of an insect whilst avoiding the pitfall of descending into lame farce.

The casting of Rudd certainly signalled the direction the studio was going in for Ant-Man, although the transition from comic actor (with the occasional dramatic role) to superhero was never going to be a given and it’s to Rudd’s credit that he just about sells the action alongside the comedy.

This knowing self-deprecation comes to the fore when Lang comes up against an Avenger and can’t help apologising to his opponent when he somehow manages to get the better of him. 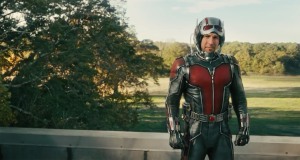 He’s lent great support from the ever-versatile Michael Peña, who plays Lang’s former cellmate and is part of the crew who gets dragged into the plan to steal the Yellowjacket. Peña’s comic timing is first-rate, while his character’s decision to save a security guard he knocked out earlier is a nice touch.

Douglas is given the heavy lifting script-wise with exposition-aplenty, but if there’s one actor you can rely on to deliver reams of dialogue with effortless charisma it’s Mr Gordon Gekko. Douglas’ presence adds heft to what is ultimately a light and frothy blockbuster and his scenes with Rudd are among the film’s highlights. 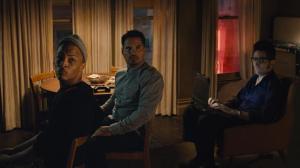 Lilly, on the other hand, struggles to make much of the movie’s sole female part. Sporting a harsh black bobbed haircut which lazily exemplifies her cool exterior, Hope is clearly far more qualified than Lang to don the Ant-(Wo)Man suit, but is instead there to merely roll her eyes and serve the plot. Pity.

It will be interesting to see how the Ant-Man fits into the rest of the Marvel Cinematic Universe as it moves into its latest globe-swallowing phase. There’s enough potential here for a fun and unpretentious franchise; Ant-Man proves that good things can come in small packages.