Pixar’s sublime return to form may be set almost entirely within someone’s head, but it’s the heart this beautifully realised love letter to the highs and lows of growing up really speaks to. 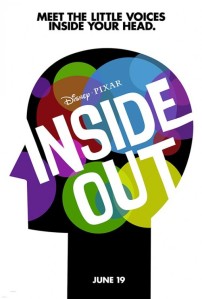 Inside Out – Welcome back Pixar, we’ve missed you.

After falling short with the diminished artistic returns of sequels Cars 2 (2011) and Monsters University (2013), there was a fear that laziness had set in at Pixar and the stratospheric heights of The Incredibles (2004) and WALL-E (2008) were no longer being reached for.

Pete Docter clearly had other ideas, however, and with Inside Out has delivered the best original Pixar feature since Up (2009), ironically also helmed by the same director. 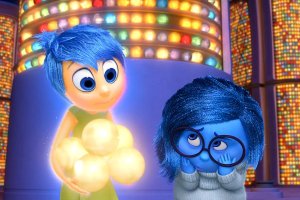 It’s going to get emotional: Joy (Amy Poehler) and Sadness (Phyllis Smith) in Inside Out

Docter clearly understands the golden rule of animation – don’t talk down to the kids. Ever since Disney had the balls to (spoiler alert) kill off Bambi’s mum way back in 1942, the most timeless animated movies have been the ones that treat their audience, young or old, with the respect they deserve.

Monsters, Inc (2001), Docter’s first film, declared that being scared was a good thing and all part of growing up, while Up dealt with issues of loss and loneliness, most notably in the heartbreaking opening reel. Crucially, both films speak to adults and children in their own way, and not just by throwing in a bit of innuendo or cheap gags to please the mums and dads.

The same can be said of Inside Out, which may follow the familiar Pixar formula of having two disparate characters thrown together and forming a bond through a shared jeopardy, but does so in a beautifully engaging fashion.

Riley (Kaitlyn Dias) is a happy young girl whose life is thrown upside down when she moves with her mum (Diane Lane) and dad (Kyle MacLachlan) from the only home and friends she’s ever known to a new life in San Francisco.

Riley is led by her emotions – Joy (Amy Poehler), Sadness (Phyllis Smith), Anger (Lewis Black), Fear (Bill Hader) and Disgust (Mindy Kaling) – who operate out of Headquarters. But when an unfortunate incident leaves Joy and Sadness stranded elsewhere in Riley’s mind, her life is thrown into turmoil as her other emotions work out what to do whilst Joy and Sadness try to find a way home.

Films set inside a person’s body aren’t unique – Woody Allen’s Everything You Always Wanted to Know About Sex* (*But Were Afraid To Ask) (1972) famously featured a sequence that explored what happens during ejaculation, whilst Fantastic Voyage (1966) and Innerspace (1987) were more action-packed – but what sets Inside Out apart is its sheer inventiveness. 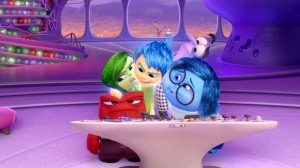 Joy and Sadness’ trip through Riley’s head is wonderfully realised, with giant banks of marble-shaped memories and grand islands that define her personality (family, friendship hockey) that start to crumble as emotional tumult grips the young girl.

Their journey back to Headquarters (which includes an inspired and tripy Pablo Picasso-esque excursion through Riley’s Abstract Thoughts) is assisted by the colourful Bing Bong (Richard Kind), Riley’s childhood imaginary friend who has been forgotten over time. Bing Bong’s gradual acceptance that Riley has moved on and his time has been and gone culminates in a scene that manages to be both heart-warming and heartbreaking all at once.

This understanding is also shared by Joy, whose single-minded belief that happiness alone is enough to define someone slowly gives way to the recognition that Sadness can play just as important a part in determining who we are.

Just as in 2014’s Boyhood, Inside Out speaks to what it’s like for all of us to grow up. Like Mason Jr. in Richard Linklater’s masterpiece, Riley is pulled out of the life she knew and struggles to fully understand the emotional impact it has.

In one hilarious scene set around the dinner table, we’re shown a family argument through the perspective of Riley’s and her folks’ emotions. Tellingly, the predominant emotion in Riley’s mum’s life is Sadness, whilst for her dad it is Anger (a cut scene inside the father’s head with his emotions enjoying watching a game of football instead of listening to the dinner chat is especially funny).

Inside Out is a rarity in cinema; a film that not only speaks to children going through the trials of growing up, but also to the parents who are doing their best, but may sometimes struggle to remember what it was like to be 11. Welcome back Pixar, we’ve missed you.