It’s the penultimate day of the Decades Blogathon, hosted by myself and the immense Tom from Digital Shortbread. The blogathon focuses on movies that were released in the fifth year of the decade. Tom and I are running different entries each day; and this one comes from the man, the legend that is Eric from The IPC. For those who don’t know, Eric’s site is a true one-off, full of his ribald opinions on the world of film.

My dad took me to see this in the theater back when I was a kid and it scared so much shit out of me that I was afraid to take a bath for a month. In fact, I’m not sure I’ve taken a bath ever since. But, thinking about this… for this blogathon that ends in “5”…. my mom didn’t marry my dad until I was seven so that would have put me seeing this in 1978.

The sperm donor that helped make me was an Easy Riding hippie that split on me and My Creator when I was three so the math doesn’t add up, but when I agreed to join this blogathon I understood there would be no math. Now that I think about it (I’ve had some cocktails) I think the theater we saw this in was one of those “two theater” jobs inside of a small shopping mall that showed new releases after market. Yes – I think that’s it and that makes sense! BOOM! I rule.

Anyway, so I saw this back then and haven’t ever really watched this since. Not that I was still scared that I would shit myself but just never felt the need. Seen it – big shark, gotcha. Then, the lads announced this run and I wanted in and looked at some things from ’75 and thought – what a good time to look at this movie again. I’ve never seen any of the sequels and I’ve always liked Roy Scheider so – let’s do this thing! And I don’t mean Tom! SOOOOOOOOOOOOOOOOOOOOOOO I watched this earlier today and…

I LOVED IT! What a good movie! I mean – I lived in Southern California so I’ve been to that ride at Universal Studios and seen the shark robot a dozen times, but this movie was fantastic. I guess, now that I’m older I can appreciate thing like: Direction, Acting, Effects and what I like to call The Incidentals. I’m sure ALL of the people reading this piece know about this movie – a big shark is eating people and people are trying to kill the shark before it eats more people. And that’s what it is but…

I thought this movie was going pretty OK until they went full in with Robert Shaw. What a character! What an actor! Screw that little part at the community meeting at the local Ju-Co. This guy’s a stud! What a deal! Here’s an example of what I call The Incidentals: 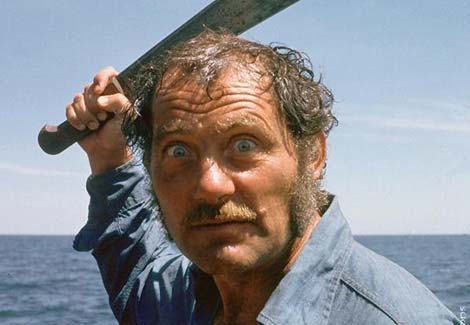 Brody and Hooper are working with Shaw, agreeing to his ridiculous demands. “Yes. Yes. Yes. You can have your caviar.” Brody agrees.

“‘ave some of thees whisky,” Shaw says, centered in the middle of the “rule of three” shot setting. “I made it myself and I quite leek it.”

To the left, Brody;  to the right, Hooper.

*Pan Right: Brody sips his, to the disappointment of Shaw who goes about his way, gathering rope.

While Shaw is upstairs in the loft, gathering his shit, Brody spits out his alcohol and talks to him about something or other. Out of curiosity, Hooper reaches for the shot glass. Absently, Brody allows him to take it and barely says “Don’t drink that” and starts talking to Shaw again. Hooper takes the shot, drinks it and does a shudder. Right then, while he’s talking to Shaw he glances at the grimacing Hopper, does a little point with his finger, smiles and does a little eyebrow raise before going back to Shaw.

Was that in the script or was that something that just happened while they were filming? That was epic!

Anyway – this movie was fantastic! I loved it! I could probably have done without the scar comparing and what’s basically a musical number but other than that, excellente!

P.S. How in the world is this rated PG (in the U.S.)??? There was a fully naked woman, lots of blood and gore and people were smoking inside buildings!