There’s a moment in Paul Thomas Anderson’s chaotically brilliant latest when Joaquin Phoenix’s perennially baked private detective asks someone what inherent vice is, only to be told “I don’t know”.

Like much of Anderson’s work, Inherent Vice will undoubtedly reward repeated viewings and, though not his finest picture, it remains an experience to inhale and imbibe

It’s a telling exchange in a film that’s stuffed with plot threads, but is enjoying itself way too much to want to stitch them together into a traditional narrative. As whacked out as Inherent Vice is, though, it is filmmaking on a higher plane of existence that reinforces PTA’s credentials as one of cinema’s most distinctive and timeless auteurs.

The 70s are generally regarded as a paranoid come down from the flower-powered counterculturalism of the previous decade, but it’s also the same decade that produced the New American Cinema and Inherent Vice is a wistful and melancholic throwback to such classic ’70s revisionist detective films as The Long Goodbye and Chinatown.

This mood is mirrored by the film’s evocative soundtrack, that includes Harvest and (appropriately enough) Journey Through The Past by Neil Young, whose mutton chops and wide-brimmed hat provided the visual way into the California dreamin’ character of Larry ‘Doc’ Sportello for Phoenix.

Doc is hired by ex-girlfriend Shasta (Katherine Waterston) to look into the disappearance of her wealthy real estate lover Mickey Wolfmann (Eric Roberts). As Doc disappears down the rabbit hole, his increasingly mind-altering investigation takes in black activists, nazi bikers, double agents, dodgy dentists, a weird cult (shades of his 2012 film The Master) and something called the Golden Fang. Meanwhile, hippie-hating LAPD Detective Christian F. ‘Bigfoot’ Bjornsen (Josh Brolin) makes his presence known from time-to-time and proves to be a curious love/hate companion to the shambling Doc. 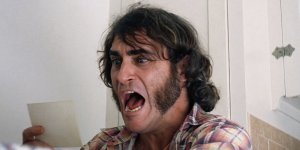 Anderson’s free-spirited adaptation of Thomas Pynchon’s novel fits perfectly with the tone and mood of a film that, whilst not as goofy as the misleading trailer would have you believe, nevertheless has plenty of laughs courtesy of Phoenix’s irresistible central performance. His hilariously over-the-top reaction to a picture of a baby is priceless, while his irreverent scribbles during interviews and exchanges with Brolin’s square-jawed square are among the film’s many highlights. 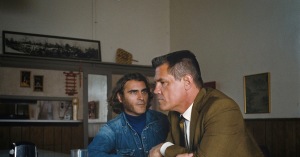 Anderson and Phoenix counteract this with moments of introspection, not least of which when he periodically looks out the window of his ramshackle beach house with a nostalgic yearning for a time that is already fading into memory; or chats with the wise Sortilège (Joanna Newsom); a character whom you suspect is possibly a figment of Doc’s febrile imagination bearing in mind her sudden appearances and disappearances and the fact nobody else interacts with her.

Phoenix is given plenty to work opposite a stellar cast, all of whom are able to put flesh on the bones of their characters thanks to PTA’s Oscar-nominated screenplay. Martin Short leaves you wanting more from his all-too-brief cameo as deranged tooth doctor Rudy Blatnoyd, while the excellent Waterston floats along as flower child femme fatale Shasta; the love of Doc’s life who may or may not be the best thing for him.

Individual frames also lodge themselves in the mind; not least of which a throwaway moment around a busy dining table involving Owen Wilson’s missing-believed-dead Coy that looks like it’s lifted straight from da Vinci’s The Last Supper.

Like much of Anderson’s work, Inherent Vice will undoubtedly reward repeated viewings and, though not his finest picture, it remains an experience to inhale and imbibe.