The irony cannot be lost on Alex Garland that the release of his efficiently tense sci-fi parable about the dangers of playing god should follow Stephen Hawking’s apocalyptic warnings that mankind is ushering in its own doom with its unquenchable drive towards creating thinking machines. 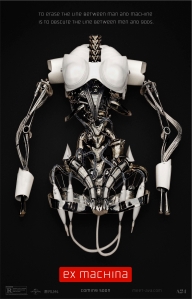 Although hardly original, Ex Machina asks enough of the right questions to make it an enticing and worthy addition to the sci-fi canon

While Hawking is more inclined to go down the road of judgement day when the moment of so-called ‘singularity’ arrives and machines finally gain conscious thought and the ability to reproduce, Garland has been quoted as saying that his sympathies ultimately lie with the robots rather than their creators.

It’s a philosophy that courses through the circuits of his low-key directorial debut Ex Machina, wherein computer coder Caleb (Domhnall Gleeson) wins a week with his boss Nathan (Oscar Isaac), the reclusive billionaire owner of Bluebook, the world’s most popular search engine. 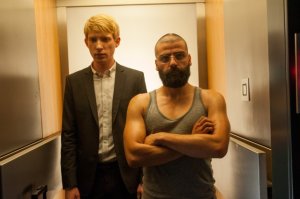 Guns out: Nathan (Oscar Isaac) shows seven-stone weakling Caleb (Domhnall Gleeson) how to do it in Ex Machina

Nathan has brought Caleb out to his wayward mountain estate in order to perform the Turing Test on his experimental humanoid cyborg Ava (Alicia Vikander) to determine whether she/it can exhibit intelligent behaviour and pass herself/itself off as human.

In spite of the glass wall between them, Caleb and Ava form a bond that both troubles and allures the young programmer and this soon evolves into something far more complicated as questions over Nathan’s real motives start to emerge. 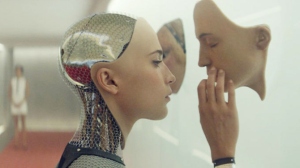 I Robot: Ava (Alicia Vikander) learns more about herself in Ex Machina

Ever since Dr Frankenstein brought life to his creation in Mary Shelley’s 1818 novel, writers and filmmakers have been fascinated by the dangers and enticements of playing god. This took the form of robots in Fritz Lang’s masterful Metropolis (1927) and has been spelling our doom ever since, most notably in The Terminator (1984); the film Hawking possibly most thinks reflects where we’re headed.

While acknowledging the tech fear of The Terminator et al, Garland’s chamber piece is more concerned with exploring the impact Ava’s behaviour has on the two men. When Ava subtly flirts with Caleb, he cannot help responding in kind in spite of himself. Likewise, when Caleb asks his boss why he’s sexualised his robot, Nathan the computer scientist gives a suitably technical response, while Nathan the red-blooded male follows it up with a playful shrug and an explanation that sex serves a primary purpose.

Cooped up for all intents and purposes in a glass prison, we inevitably start to feel sympathy for Ava and it’s to the film’s credit that as it morphs into a tech-thriller and tries to throw us off the scent, that emotional engagement is maintained.

Vikander gives a wholly convincing performance as Ava and invests the cyborg with a complexity befitting such a well-rounded character. Her movement is both graceful and artificial and brings to mind Haley Joel Osment’s underrated turn as David, the robot who just wants to be a boy in A.I: Artificial Intelligence (2001). 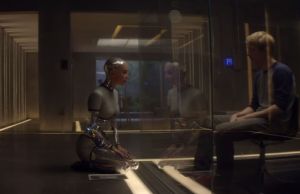 The chameleonic Isaac is typically excellent as Nathan, whose arrogance and petulance are matched by his pathetic weirdness, not least during a drunken disco dance with his mute servant Kyoko (Sonoya Mizuno) which is as odd as it is amusing. Meanwhile, Gleeson (who will be teaming up again with Isaac in that other sci-fi movie later this year) builds upon his recent good work in Frank and Unbroken with another solid turn as the somewhat overwhelmed programmer who starts to question his own humanity as the truth of what is happening takes hold.

Although hardly original, Ex Machina asks enough of the right questions to make it an enticing and worthy addition to the sci-fi canon.