A defining moment in a nation’s history gets the film it deserves in this sure-footed drama that forsakes hagiography and gets to the human story between the lines. 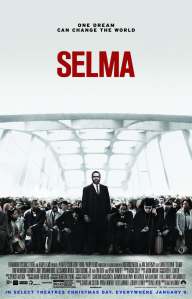 Containing a message that remains just as pertinent as it did almost 50 years ago, the masterful Selma takes you to the cinematic promised land

With such weighty material to work with, director Ava DuVernay and writer Paul Webb could so easily have served up a Hallmark-friendly Martin Luther King, Jr greatest hits package that ignored the man.

However, without MLK’s speeches to work with following the decision by his estate not to allow their use, the filmmakers have instead been liberated from the baggage those words bring with them to show us that King was a man just like anyone else; one trying to make the right choices in the face of almost overwhelming circumstances. 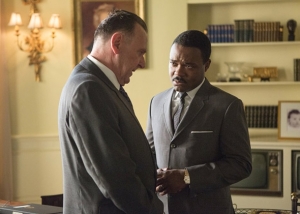 The strength of Selma comes from showing us King the politician, King the opportunist, King the strategist; while also having the bravery to sideline MLK for stretches to focus on his fellow activists as they prepare for the crucial 1965 Selma to Montgomery voting rights marches.

The length of the journey ahead is powerfully juxtaposed in the opening reel as King accepts the 1964 Nobel Peace Prize in Oslo, while in the next scene a Baptist church is bombed in Alabama, killing four young black girls. This is followed by Annie Lee Cooper (Oprah Winfrey) having her voter registration form denied in Selma by a white registrar on ridiculously spurious grounds.

On the march: civil rights supporters get to work in Selma

Despite being granted an audience with President Johnson (Tom Wilkinson), MLK’s (David Oyelowo) calls on the Commander-in-Chief to enact legislation that will enable black citizens to register to vote unencumbered falls on deaf ears, with Johnson stonewalling the “voting thing”.

With Selma chosen by King as the staging post from which to march, the town becomes a hotbed for racial tension as a brutal police force, led by its racist Sheriff stand in the way of the peaceful protesters and state Governor George Wallace (Tim Roth) stokes the fires from a safe distance.

By narrowing in on a relatively brief, but critical moment in the civil rights movement, Selma gives itself the luxury of being able to spend a healthy amount of time with some of the key figures, including Jimmie Lee Jackson (Keith Stanfield), James Bevel (Common), John Lewis (Stephan James) and Diane Nash (Tessa Thompson). Just like any political movement, conflicting views exist on what strategy to take and DuVernay lets these scenes play out as tensions rise.

Oyelowo, meanwhile, presents King in a number of different ways, from the powerful orator with a gift for stoking a crowd with just the right amount of passionate indignation, to the leader getting his hands dirty on the frontlines. Away from the hullabaloo, Oyelowo paints MLK as a sinner doubting his path and struggling to maintain his marriage to the fiercely strong Coretta (Carmen Ejogo) in the face of huge pressure.

It’s a marvellously rounded and multi-faceted performance from Oyelowo and no mere caricature. The actor may have MLK’s preaching vocal inflections down to perfection, but there’s a lot more going on. Ejogo too gives an excellent account of herself as someone who isn’t just the wife of Martin Luther King, but a woman in her own right.

The infamous ‘Bloody Sunday’ horror show, when the protestors’ initial march on March 7, 1965 was thrown into chaos when they were brutally attacked crossing the Edmund Pettus Bridge by police on horseback is distressing to watch and brilliantly shot by Bradford Young as terrified marchers flee through the eerie fog of tear gas whilst being mercilessly beaten.

Some have criticised the film for a heavy-handed depiction of Johnson, in particular for suggesting he authorised J Edgar Hoover’s FBI to dig up dirt on King. He’s portrayed as an opportunist (much like any other politician then) whose mind is reluctantly turned by the infamy of Bloody Sunday and at one point utters the ‘N’ word in conversation with the implacable Wallace (not one of Roth’s best performances). It’s perhaps fair to say that DuVernay doesn’t invest as much into these scenes as she does elsewhere, but every film needs its villain and the political establishment (led by the President) is it in the case of Selma.

Containing a message that remains just as pertinent as it did almost 50 years ago, the masterful Selma takes you to the cinematic promised land.