Anyone who begrudgingly comes to accept their true talent lies not in what they’d hoped will find a connection to this unique and idiosyncratic story about those blessed with artistic creativity and those who hitch along for the ride. 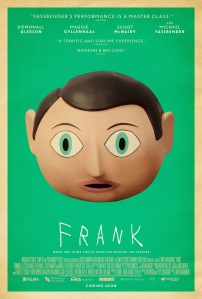 With a free will and an outsider’s spirit all of its own, Frank is a wonderful one-of-a-kind

It’s a fair bet to say that a good number of critics have at least entertained the idea of doing the very thing they write about. In most cases these dreams remain unfulfilled, consigned to the ‘what if’ section of our brain.

In Jon Ronson’s case, he did it the other way around, having played a purposefully cheap sounding keyboard for three years in Frank Sidebottom’s Oh Blimey Big Band in the 1980s before going on to become a highly respected gonzo journalist and writer of such books as The Men Who Stare At Goats, which went on to receive mediocre treatment in a film of the same name starring George Clooney and Ewan McGregor.

Ronson’s time with Frank and his real life alter-ego Chris Sievey inspired this bittersweet tale of Jon (Domhnall Gleeson), an office drone and wannabe songwriter whose monotonous existence spent living with his parents in a dead-end seaside town changes overnight when he stumbles across the members of Soronprfbs, an avant-garde band led by the larger-than-life Frank (Michael Fassbender), who constantly wears a giant papier-mache head that features an unblinking look of mild surprise.

Jon, like us, is fascinated by the man beneath the fake head and jumps at the chance to join Soronprfbs on a full-time basis as they take to a cottage in the middle of nowhere to record their new album, a year-long process that involves extreme levels of self-indulgence as anything and everything is toyed around with to create the perfect sound.

All the while, Jon chronicles Soronprfbs’ journey through Twitter and YouTube and creates a social media-fuelled monster that leads to a possible big break, but also threatens to destroy the soul of the band and damage the fragile Frank.

It’s not until a good way through the film that you realise just how many levels Frank is working on. In another picture, Jon’s voyage of self discovery would end in a very different – and predictable – way, but rather than helping to inspire the band to achieve deserved success, the actions he takes only end up serving his own deluded ambitions.

The ying and yang of Frank (Michael Fassbender) – Maggie Gyllenhaal’s uncompromising Clara and Domhnall Gleeson’s Jon, who just wants to be loved

In a painfully well observed opening, Jon tries in vain to fashion a song out of his mundane experiences, only to take to social media to justify his banal existence through pointless tweets. His striving for validation is sought not only from his growing number of Twitter and blog followers whom he panders to with a running commentary of ‘aren’t I crazy’ posts, but also from his fellow band mates, who mostly look at him with indifference, in particular Maggie Gyllenhaal’s erratic theremin player Clara (who comes across like a Wes Anderson version of Karen O from the Yeah, Yeah, Yeahs).

Like Amadeus‘ Salieri, Jon knows his talent cannot match that of Frank, so instead becomes a leech in the hope his genius can somehow rub off on him. What Jon doesn’t factor in is Frank’s evident mental illness, which manifests itself through the character’s increasingly unstable behaviour. 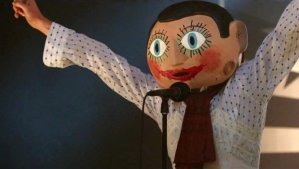 Hello audience!! The titular Frank (Michael Fassbender) gets all dolled up

It’s an admirable turn from Gleeson in a role that’s unlikable only in so much as it’s so painfully believable. Jon almost always means well, but loses his way and drags the band down with him when the prospect of fame and fortune rear their heads.

Considering we cannot see the character’s facial expressions, Frank is a captivating presence, thanks in no small part to Fassbender’s physical performance that lends the character a tragicomic edge which grows more troubling as the film nears its climax. Frank is a blank slate is many ways, a character defined by the ying of Jon’s desire to be loved and break big and the yang of Gylenhaal’s Clara, who has an indefatigable refusal to compromise for fear of selling out. Torn between both sides, the cracks in his personality threaten to break apart.

Frank’s static expression takes on a different inclination depending on the angle of Fassbender’s body and the way he turns his giant fake head, while the film’s final reel is given an extra wallop by the actor’s coiled delivery of the film’s signature tune I Love You All.

Working from a script by Ronson and fellow scribe Peter Straughn (who also penned the screenplay for The Men Who Stare At Goats), director Lenny Abrahamson skirts passed twee farce and instead hits us with a film that’s as moving as it is funny and painful.

With a free will and an outsider’s spirit all of its own, Frank is a wonderful one-of-a-kind.