What does a world-weary man of faith do when those around him seek to drag him down to the moral cesspool?

This marks the middle chapter in a planned trilogy between director and actor. On the strength of Calvary, we should be spoiled indeed

The arduous journey taken by the imperiled Father James (Brendan Gleeson) is the focal point of John Michael McDonagh’s pitch perfect follow-up to his promising debut The Guard (2011).

McDonagh shares an envious talent for dialogue with his brother, the playwright and filmmaker Martin McDonagh (In Bruges, Seven Psychopaths) and on this occasion finds the visual panache that was sometimes lacking in his previous work.

There’s a striking power to the pit of anger and self-loathing that has engulfed the residents of this Irish coastal village, none more so than in the masterful opening scene; an unbroken four-minute take that rests on Gleeson’s wonderfully nuanced reactions to a faceless parishioner’s declaration during confession that he is going to kill him as retribution against the Catholic church for allowing the abuse he suffered as a child at the hands of a fellow priest to go unpunished.

James is told to put his affairs in order and spends what we believe are his last days meeting with his disaffected flock, including a butcher (played by Chris O’Dowd), a doctor (Aidan Gillen) and a successful businessman (Dylan Moran), and building bridges with his depressed daughter Fiona (Kelly Reilly), who has come to visit following a failed suicide attempt. 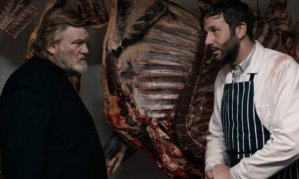 The whodunnit aspect of the story is a smoke screen for what the film is really about; specifically the loss of faith in both institutions and ourselves and the rage that stems from this towards those in power. Calvary is the Biblical location where Jesus was crucified and the comparison becomes clear as McDonagh’s film plays out.

High Noon is a clear influence (a newspaper he’s reading early in the film refers to Ireland’s “wild wild west”) while, much like Tommy Lee Jones’ sheriff in No Country For Old Men, James is bewildered by the peccancy that seeps out of the village.

Each of the villagers he visits is a ‘sinner’ in some form; whether it be of a sexual or moralistic nature (Moran’s repugnant capitalist worships only materialism and believes there’s “no such thing as too much; there’s only not enough”); even his daughter is a sinner in the eyes of the church for having tried to take her own life.

Tellingly though, in spite of their ridicule and goading, most of the locals feel a compulsion to talk to James; as such the character is in essence a vessel to offload their self-loathing.

Someone is determined to make a point in Calvary

Calvary‘s heightened reality (the moon sits enormously in the sky, for example) and broadly brushed supporting characters can take you out of the film, but its pitch black humour (delivered more often than not by a sardonic James) and wry observations on the dirty affair between the church, its public image and money are on the nose.

The international cast (which includes Isaach de Bankolé and an ancient looking M. Emmet Walsh) are roundly excellent, but all pale in comparison against Gleeson’s supreme performance. Gleeson seems to get better with age and his effortlessly indomitable delivery belies the complexity of a role that one can only imagine this actor inhabiting.

This marks the middle chapter in a planned trilogy between director and actor. On the strength of Calvary, we should be spoiled indeed.