If you thought the world needed another B-movie about an ageing American CIA agent laying waste to half of Paris, you’ll probably think again after watching this sloppy Eurotrash from journeyman McG.

No-one’s happier to see Costner back on the big screen than I, it’s just a shame it’s in something as underwhelming as 3 Days To Kill

Following an early career spent making offbeat and highly stylised action films, Luc Besson has largely turned to writing and producing thrillers that are as formulaic as they are interchangeable.

In certain cases that formula has chimed with audiences – The Transporter series proved a tidy hit and turned Jason Statham into a bona fide action star, for instance. Taken also set the box office alight and gave Liam Neeson a surprising and unlikely new career turn as a movie hard ass.

There’s an argument to be made for giving audiences what they want; however, Besson has barely bothered changing up the formula and, with McG’s lunk-headed direction in tow, the end result is the unnecessary and lazy 3 Days To Kill.

That being said, it’s great to see Kevin Costner back as a leading man following a series of supporting turns in the likes of Man Of Steel (2013) and this year’s unfairly maligned Jack Ryan: Shadow Recruit, even if he looks like he’d rather be sightseeing in Paris than shooting half of its citizens.

Costner plays CIA agent Ethan Renner, who’s diagnosed with a terminal disease and decides to spend his last days trying to rebuild his fractured relationship with estranged daughter Zoey (Hailee Steinfeld) and, in turn, ex-wife Christine (Connie Nielsen). Ethan’s Company service is cut short by his illness; however, he’s drafted in by CIA assassin Vivi Delay (Amber Heard) to track down an international arms dealer called the Wolf (Richard Sammel). You can guess the rest.

The single biggest problem with 3 Days To Kill – aside from the fact it’s not very good – is that it doesn’t know what film it wants to be. On one hand there’s a family drama in which an absent father endeavours to reconnect with the people who really matter once all the assassinating and running after criminals appears to have been swept aside. Steinfeld is a fine young actress and the scenes she shares with Costner are nicely played. Tellingly, it’s in these quieter moments when Costner looks properly switched on. 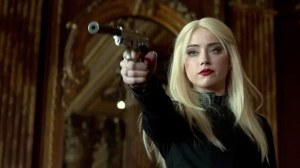 On the other hand there’s the well-worn action set pieces that involve Costner waving a gun around and chasing down generic evil-looking foreign terrorists. Even the film’s big explosive set piece loses its impact after having appeared in the trailer (naturally).

No-one’s happier to see Costner back on the big screen than I, it’s just a shame it’s in something as underwhelming as 3 Days To Kill.