There’s something remarkably matter-of-fact about Ryan Coogler’s portrait of the hours leading up to the tragic and needless shooting of Oscar Grant III. 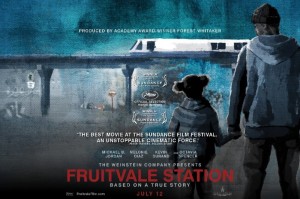 An undeniably powerful and harrowing lament of a life taken far too early it may be, but Fruitvale Station fails to break free of its heavy-handed shackles

The drama that unfolds over the course of Fruitvale Station‘s 85 minutes could so easily have been amplified for propagandistic effect, so it’s to the credit of both the writer-director and a mature and measured Michael B. Jordan in the lead role that this is avoided.

However, a heavy-handed script, manipulative visual touches and a televisual style cut the film short of being a truly outstanding debut feature from Coogler.

Oscar (Michael B. Jordan) hangs out with his daughter Tatiana (Ariana Neal) in Fruitvale Station

Fruitvale Station follows the final day of Grant, a young guy from California who spends New Year’s Eve in 2008 trying to make a fresh start.

As well as attempting to work things through with his girlfriend Sophina (Melonie Diaz) for the sake of their daughter Tatiana (Ariana Neal), Oscar is treading a more straight and narrow path with the law and hoping to get his job back while preparing for his mother Wanda’s (Octavia Spencer) birthday.

However, in a cruel irony, an act of kindness earlier in the film inadvertently creates a chain of events that lead to Oscar’s death at the eponymous Fruitvale Station when he’s shot in the back by a BART police officer; an act filmed by several passengers on their mobile phones.

The film’s elliptical structure opens with chilling footage taken by one of the passengers before rewinding back to the start of the day and following Oscar until his tragic shooting. The harrowing events at the station are undeniably shocking and are powerfully reenacted by Coogler with the help of Kevin Durand and Chad Michael Murray as the police officers whose actions led to his death (the officer who shot Oscar argued in court that he mistakenly used his firearm, believing it to be his Taser weapon).

There’s a sadness to the scenes leading up to this moment as we know Oscar is going to be denied the fruits of his labours. However, Coogler lets himself down by forcing the issue too much.

The death of a dog right in front of Oscar is a little too on the money and isn’t helped by the director pulling the shot back to show a train leaving a station as a prophetic sign of what’s to come.

Officer Caruso (Kevin Durand) imposes himself on Oscar (Michael B. Jordan) and his friends in Fruitvale Station

Later in the film, Oscar suggests to Sophina that they should stay in, but she insists on going out to enjoy New Year’s Eve. Likewise, his daughter implores Oscar not to go out because she can hear “gunshots” (actually firecrackers), but he promises her there’s nothing to worry about.

This lack of subtly extends to some of the visual choices made by the director. A slo-mo scene of Oscar running after Tatiana feels manipulative and the cheesy score laid on top merely reinforces this. A further life decision that sees Oscar driving to the coast and staring out to sea is beautifully filmed, but serves no other purpose than to hammer home a point we’ve already ascertained.

In spite of this, the performances are universally compelling, with Spencer on devastating form as Oscar’s mother, whose hopes of a better life for her son following a stint in jail are cruelly snatched away. Diaz is also excellent as the headstrong Sophina, while Neal is a natural who’s required to do as much heavy lifting as many of her older co-stars.

However, this is Jordan’s film and he gives a magnetic turn as Oscar. Jordan is careful not to paint his character as a saint, rather’s he’s a good man who’s smart enough to understand the path he needs to take is different to the one he’s found himself down.

An undeniably powerful and harrowing lament of a life taken far too early it may be, but Fruitvale Station fails to break free of its heavy-handed shackles.