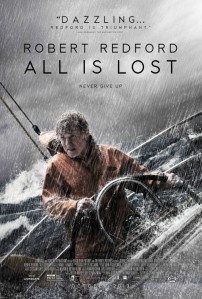 All Is Lost is cinema in its purest form, a visual poem of hope, despair, strength and weakness that will wash over you like a warm tide

Conversely, in Chandor’s compelling and very moving follow-up, All Is Lost, it’s actions rather than words that drive the narrative forwards and give the film its raw, physical power.

What links both films are the sky-high stakes – livelihoods are on the line in Margin Call, while a man’s life hangs precariously in the balance in All Is Lost. Robert Redford plays the unnamed near-ancient mariner whose solo sailing journey turns into a desperate fight for survival when a stray shipping container rips a hole in the side of his boat.

The calm before the storm in All Is Lost

A brutal storm turns a bad situation into something far worse and, still 1,700 miles from land and without any working means of communication, Redford’s mariner (described as “Our Man” in the closing credits) must rely on his resourcefulness and dwindling resolve if he has any hope of survival.

Redford’s casting is a masterstroke on Chandor’s part. An icon of cinema for five decades, Redford was the anti-establishment pin-up respected by the establishment, who has often been at his best playing mysterious loners. 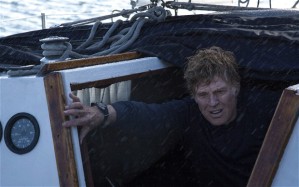 Far from resting on his laurels, All Is Lost is arguably the 77-year-old’s most daring and challenging role to date. Few actors are as intriguing to watch as Redford and, with little or no dialogue to get in the way, it frees him up to act with his gut.

It’s a brave and entirely naturalistic performance and takes the actor to places we’ve never seen him go before. Picture Redford and the Sundance Kid or Jay Gatsby will likely spring to mind – a fresh-faced icon of cinema. But here, that familiar shock of blonde hair is greying at the sides, while the physical disintegration he goes through over the course of the film is alarming. The film may take place over the course of eight days, but Redford appears to age several decades.

The storm hits hard in All Is Lost

Although few words are spoken, sound plays an integral role in the film. We know the groaning, snapping sound that starts the movie spells big trouble for Our Man, while the terrible cacophony of the storm feels like a punishment for unexplained past deeds. Likewise, Alex Ebert’s elemental score drifts in and out of the film and never once tries to get in the way of the drama.

The title of the film derives from Redford’s opening voiceover (which accounts for almost all of the dialogue), wherein he seeks forgiveness from an unnamed person, presumably his wife and/or family (a wedding ring is pretty much the only back story we get for his character), before concluding that “all is lost”.

As to whether all is indeed lost come the ambiguous ending and the cut to white is clearly open to interpretation, but it’s worth playing over in your mind what Our Man has been forced to endure throughout his ordeal before making a final judgement.

All Is Lost is cinema in its purest form, a visual poem of hope, despair, strength and weakness that will wash over you like a warm tide.