There may be plenty of hunger before we finally get to the games, but it’s more than worth the wait in this bigger, bolder and – yes – better sequel.

Even in spite of Lawrence’s knockout performance The Hunger Games: Catching Fire is so pleasing that come the closing credits, you’ll be hungry for the next serving

Despite being an international bestseller, nothing was written in stone to suggest Suzanne Collins’ trilogy of young adult sci-fi adventure novels would make a convincing leap to the big screen.

However, paydirt was well and truly hit with the casting of star-in-waiting Jennifer Lawrence in the central role of Katniss Everdeen who, along with strong direction from Gary Ross and striking production design, turned 2012’s The Hunger Games into a mature and effective first chapter in the franchise. 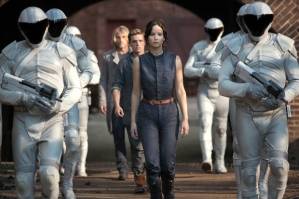 With almost double the budget under his belt, new director Francis Lawrence (no relation) has turned in a follow-up that manages to avoid many of the symptoms of sequel-itis and builds on the foundations of the first movie to impressive effect.

Catching Fire picks up where The Hunger Games left off, with Katniss and fellow 74th Hunger Games tribute Peeta Mellark (Josh Hutcherson) reluctantly embarking on a victor’s tour of the impoverished districts of Panem out of fear for their families’ safety. Anxious to stamp out the unrest that’s been brewing following Katniss’ show of defiance in the last Games, despotic President Snow (Donald Sutherland) announces that the 75th anniversary Quarter Quell will see former champions – Katniss and Peeta included – fight to the death in the most twisted and sickening Games yet.

Just as in the first installment, Catching Fire spends a great deal of time building up to the gladiatorial spectacle of the Games themselves. However, unlike The Hobbit: An Unexpected Journey, for example, you never get the sense the film is treading water and indulging itself. The slow, gradual wind up towards the horror of the Quarter Quell feels neccessary, as if the characters are pieces on a chessboard being carefully positioned.

That this build up is as engaging as it is is largely down to the captivating performance of Lawrence, who commands the screen. Since her breakout turn in Winter’s Bone, Lawrence’s stature has grown with every film and here it’s as if the camera is magnetised to her. What makes Katniss so appealing – and so human – is that she remains a reluctant hero, someone who would much rather be out hunting with her friend/love interest Gale (Liam Hemsworth) than be the face of the rebellion or a thorn in Snow’s side.

Catching Fire‘s supporting cast is an engaging mix of young and established talent, from Sutherland’s oily turn as the banally evil Snow, to Woody Harrelson’s colourful performance as Katniss and Peeta’s alcoholic mentor Haymitch and Elizabeth Banks’ nuanced portrayal of the garishly dressed Team Katniss cheerleader Effie Trinket, whose blind obidience to the Capitol gradually erodes as the veil is lifted. 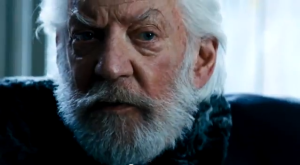 Special mention must go to Stanley Tucci, who’s even more over-the-top this time around as Caesar Flickerman, the Hunger Games talk show host with the impossibly white teeth and insincere laugh who peddles bread and circuses to the masses and stands alongside Snow as the face of Panem’s totalitarian regime. It’s the film’s creepiest character and Tucci’s performance is skin-crawlingly effective.

Just as in the first film, Catching Fire, well, catches fire when the Hunger Games finally commence. Although essentially the same set-up as the previous film (last person standing wins), this time around we get poisonous gas, electrified force fields, psychological warfare and, most disturbingly, flesh-eating monkeys thrown in. Each mini-set piece is striking in its own way and follow each other so quickly you’ll be left as exhausted as the tributes.

Katniss Everdeen (Jennifer Lawrence) and Peeta Mellark are the girl, and boy, on fire in The Hunger Games: Catching Fire

As is the way of modern day franchises, this second installment is darker than its predecessor and is much better for it. The social commentary and political subtext alluded to in the first film is more pronounced this time around (both visually and in the dialogue, most notably between Snow and Philip Seymour Hoffman’s Games Designer Plutarch Heavensbee) and the violence more reactionary and brutal. It’s pretty strong stuff for what’s supposed to be a film aimed at young adults.

Even in spite of Lawrence’s knockout performance Catching Fire is so pleasing that come the closing credits, you’ll be hungry for the next serving.