The Debuts Blogathon has been a lot of fun so far and today’s entry is no exception. Melissa has been running The Soul of the Plot for less than a year, but already she’s carved out her own particular niche in the film blogging world with a great site featuring reviews of films past and present. Here, she takes a look at The Pleasure Garden, the 1925 debut of one my very favourite directors, Alfred Hitchcock.

For my entry in the Debuts Blogathon, I decided to cover Alfred Hitchcock’s The Pleasure Garden. Although Hitchcock did make a film before this, it was never finished; and while he considered his next film The Lodger: A Story of the London Fog his first ‘Hitchcock Film’, history remembers The Pleasure Garden as his debut.

It’s easy to see why Hitchcock didn’t give this film much credit looking back. It’s not bad – it’s actually quite enjoyable – but it’s so thematically and tonally different from what he normally does that it bears little resemblance to the later films he is most well known for. 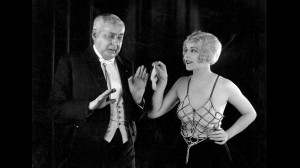 The first thing you will notice is that the film is silent. Hitchcock actually made a total of nine silent films (excluding the lost ones), with his last, Blackmail, being redone for sound in 1929. The Pleasure Garden is the only one I’ve seen thus far, and from what I remember Hitch does a pretty average job at telling the story through the visuals. There are a couple of shots where he focuses on a specific object, as he did in his later films (such as the key in Notorious), but there aren’t a whole lot of super technically impressive standout shots here (though there are some).

Another thing to note is the very poor picture quality of the film. I know I can hardly complain as I watched it on YouTube, but it’s free there and the restored version isn’t available on DVD yet. The BFI has just restored all nine of them, but they are only showing them in very select theatres. At certain points the picture quality is so awful you can’t even see the actors’ faces; they’re just blobs of white.

The Pleasure Garden is the theatre at which our two main characters work as part of a chorus line. Patsy Brand (Virginia Valli) is already established there, and helps out newcomer Jill Cheyne (Carmelita Geraghty). Jill eventually surpasses Patsy on the showbiz ladder, and reveals her true nature as greedy, manipulative, and selfish. Though she is promised to Hugh (John Stuart), she doesn’t have a problem flirting with the director of the show and a fan, Prince Ivan (Karl Falkenberg). Worried about Jill, Hugh trusts Patsy to look after her while he is away, and also introduces her to a colleague of his, Levett (Miles Mander). In Hugh’s absence, Patsy can do little to keep Jill in line, but does manage to marry Levett before he leaves as well. Once Levett leaves, his behavior starts to mirror Jill’s more than is desirable. 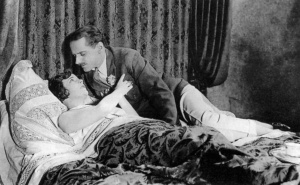 At this point, Hitchcock does offer us a shot worth mentioning. As Patsy is seen waving goodbye to Levett, another woman’s hand waving hello to Levett overlaps hers. Right then you know he’s a pile of cheating scum, even if you didn’t already, and Hitchcock is able to convey this in a wonderfully simple way. With this scene transition, you know all you need to know about Levett and he’s not even in it!

The ending gets wonderfully melodramatic. It’s quite a laugh really, seeing all the over-the-top things that end up happening. I rather doubt it was intended to be funny, but nevertheless I had a real good time watching it and heckling it a bit as it went along. Everything escalates pretty quickly and it’s humorous to see. There’s betrayal, and then an attempted and some actual murders, and someone’s ghost comes back, all in the last few minutes. It’s pretty crazy.

One complaint I do have though, besides the dismal picture quality, is the plot itself. It’s very uneven and unexpected things keep happening. Not in a good plot-twist type way, but in a really random way. I could never really tell where the story was going, which is fine in general, but it also felt weird going through, because all of this random stuff kept happening. That’s not to say that it didn’t hold my attention, because it did. I was worried about that, because I have been known to fall asleep during silent films upon occasion. This one is only about an hour and is so jam-packed with random and crazy plot points that it stays pretty interesting throughout, if only because I was wondering what crazy thing was going to happen next.

I’ll have to say that The Pleasure Garden is a pretty good film, but it’s nowhere near the standard of his later films like Psycho or Vertigo. I didn’t expect it to be, so I was just glad I could get into it at the time. In terms of themes, I wouldn’t have noticed the similarities that I did unless I was looking for them. You still have murder, and men being jerks to women, but the way they are presented doesn’t seem to me uniquely Hitchcockian. Also, there’s no signature cameo here; he didn’t start doing that until his next film. It’s worth a look if you like silent film, or Hitchcock, or movies with crazy plots, but for the casual film viewer it’s not really essential watching.

Over at Terry Malloy’s Pigeon Coop, Darren Aronofsky’s striking directorial debut Pi is being covered by KaramelKinema. Head over to Chris’s site now by clicking here.

Meanwhile, back on my patch, you couldn’t ask for anything more different as we have Elwood over at From the Depths of DVD Hell taking a peek at Frank Henenlotter’s micro-budget 1982 horror classic Basket Case.