Welcome to the first in what promises to be a fun and diverse examination of directors’ first features. The ‘Debuts’ Blogathon is being run by myself and Chris at Terry Malloy’s Pigeon Coop. Each day, Chris and I will run a different entry in the Blogathon. The first of my entries comes from the informative and varied Big Screen Small Worlds. This great site features lots of different stuff, from thought-provoking essays to great lists and informative reviews. Make sure to check it out.

Bottle Rocket was the directional debut of Wes Anderson, as well as the debut of brothers Luke and Owen Wilson working together onscreen. After this film, Anderson continued on to direct movies such as Rushmore, The Royal Tenenbaums and his most acclaimed work to date, Moonrise Kingdom.

Bottle Rocket was based on a short film with the same title, translated into a feature film. While I do favor Anderson’s latter works, I think that as a follower of his work, Bottle Rocket deserves a place in one’s viewing shelf, as it displays earlier styling that Anderson would soon later hone and strengthen in his future films.

The movie introduces us to two main characters, Anthony and Dignan, as they pick up where their friendship left off after Anthony’s stint at a mental hospital. With that friendship comes Dignan’s plan to live off as fugitives, working for a certain Mr Henry and pulling off heists. They soon recruit their friend Bob, simply because he has a car. After some planning they soon pull off a small-time robbery, leading Dignan to plan bigger heists and soon put their lives on the road. However, their plans come to a halt when Anthony falls in love and Bob faces a family dilemma. Soon enough the three go on their separate ways, but not long after Dignan goes back with a new plan, reeling Bob and Anthony back to his schemes and revealing a twist in the end.

As a debut feature of the Wilson brothers, they did have some on-screen chemistry together, albeit their characters were not far from the people they play in their other works. Characterisation was no problem for them, although I’d prefer it if Owen Wilson played his character in a more convincing manner. The plot itself requires some conviction to be believable, and although Dignan seems sold on his plan, it takes a lot more conviction on his act to make it seem believable and absurd. Plus, it would look like his character was more of the insane one, and not Anthony, who checked himself in because of exhaustion. 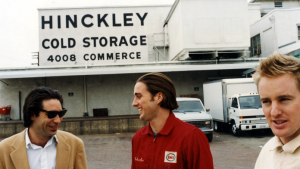 The plot was absurd in nature, as there was really no logical reasoning for it, except that it seemed like the next logical step for the characters to take. As I’ve said, the plot needs the characters to be convincing that this is the rational thing to do, and while it is to some extent, the whole premise doesn’t seem to be sold to Anthony and Bob, as it quickly falls apart after some time. While it also promised an interesting movie, I felt that the plot fell flat in the middle, but somewhat redeems itself during the final act. If I would have caught the film in the middle, I wouldn’t think of it as an Anderson film as it felt way out-of-place in his usual style and writing.

The writing was weak in comparison to future works. However, Bottle Rocket has a sense of realism, in the way that the characters don’t exist entirely in the sort of Anderson-like world we see in his later work. As I’ve mentioned, the plot fell in the middle, and his characters weren’t solid to begin with. While he was molding what the characters would seem like in the writing, I think it might have gotten lost in translation. The characteristics are there, but it has a difficult time embodying itself in the portrayal of its characters. However, the writing becomes the start of how Anderson would soon take his characters and mold them to the interesting beings they are.

While the supporting cast themselves played a bit of pivotal role in the film, their presence was rather minimal, therefore making little impact. I thought Bob was a good character, and Mr Henry is a strong character, but with minimal lines and presence they didn’t make much of an impact. Bob, played by Robert Musgrave, felt more of a floating character, as he wasn’t exactly a sidekick, but he wasn’t a main character either. However, the movie made it seem like he had a purpose, or he really was just there because he had a car. Mr Henry was a strong character, but with only a few minutes of screen time his presence didn’t strengthen the film. The only supporting character that had more of an on-screen presence was Inez, who was essential to Anthony’s story.

Bottle Rocket was the film that launched Anderson’s career critically and, over time, his work has become acknowledged and acclaimed both critically and commercially. It already exhibits pieces of his style that is to be expected in his films. Over time, his work has carried his trademark style, whether the setting is on an isolated island, inside a train or even rooms inside a house. Looking back, his vision hasn’t changed, but has improved and developed over time. His writing and his visuals certainly improved, and he has taken into practice featuring staple actors in his works.

In my opinion, his work has definitely changed and improved over time, and it did not take him several tries to do so. He succeeded with Rushmore and his movies never seemed to falter after that. While my personal favorite is The Royal Tenenbaums, his mainstream career is beginning due to recognition of Moonrise Kingdom. His writing style definitely improved in such a way that there is a clear distinction of his characters and what he wanted them to portray. He takes simple ideas and turns them into enjoyable films. It’s not only his work that he excels at, but even through adaptations of others stories. Another favorite of mine is Fantastic Mr Fox, an adaptation of a Roald Dahl story. I found the writing to be witty and his take on the book simply amazing. He manages to make a great film in a different medium that still has his name written all over it.

His films may vary but his style is written all over them. His filming style and his visuals definitely improved (granted that technological advances should also be given credit for it) and evolved over time. He still kept some elements from his previous films, but it’s rather evident that there was significant improvement, both in content and translation. With a new film coming in, there is already a high expectation of what it will deliver, but based on Anderson’s filmography, I’m quite certain it wouldn’t be a disappointment. I don’t think he’s going to be stopping anytime soon.

Bottle Rocket may not be his famous work or his best work but it deserves its space on Anderson’s shelf. It’s the film that gave him notice, not to mention that it provides the basis for the evolution his work eventually went through feature after feature. What Bottle Rocket is, at the heart of it, is an ‘experimentation’ film, to see how potential audiences would receive his work, and what elements would he keep, leave out or continually change. In a sense, this becomes an essential viewing of his filmography, because it maps out how the director started, and what bits and pieces became predominant in his future works. While Rushmore technically became the film that launched him into director-stardom, Bottle Rocket should definitely not be set aside and a must-watch for any Anderson fan out there.

If that’s whetted your appetite, over at Terry Malloy’s Pigeon Coop is a tremendous look at John Lasseter’s ground-breaking 1995 debut Toy Story, courtesy of the excellent Video as Life site. It’s well worth checking out, so make sure to do so after you’ve read the review.

Check back tomorrow to see Cinematic take a look at Terrence Malick’s Badlands.