Johnny Depp and Gore Verbinski turn their big budget sights from the high seas to the high plains in this revisionist reboot of the TV serial featuring the sort of running time that would put even a Kevin Costner horse opera to shame.

Better than some knife-wielding critics would have you believe, The Lone Ranger still feels like a missed opportunity to reinvigorate a dying genre for a modern blockbuster audience

Actually, strictly speaking, this is their second western following the critically acclaimed 2011 animated movie Rango, in which Depp played a chameleon (appropriate considering the diversity of roles he’s had over the years) who becomes the new sheriff of a town called Dirt.

Considerably more ambitious, The Lone Ranger desperately tries to cook up the same mix of humour and action that made Pirates Of The Caribbean: The Curse Of The Black Pearl such a massive hit, but while there are glimmers of a superior summer blockbuster here, it ultimately shoots itself in the foot.

The film seeks to reimagine the origin story of The Lone Ranger, a heroic masked ex-Texas Ranger who fights injustice on the American frontier astride his regal horse Silver and with his trusty Native American sidekick Tonto in tow.

Using the framing device of an aged Comanche Tonto (Depp, a la Little Big Man) relating events to a young boy, his narration tells of how he first met John Reid (Armie Hammer) and how the young lawyer was the sole survivor of a brutal massacre by the feared outlaw Butch Cavendish (William Fichtner) and his gang. Befriending a comedy horse, Reid is persuaded by Tonto to become the masked Lone Ranger and help him seek justice against Cavendish and a wider, more insidious corruption.

One of the issues with The Lone Ranger is the rather odd and sudden deviation in tone from eyebrow-raising violence to broad humour, sometimes in the same scene. Following the brutal massacre, for instance, that leaves Reid barely alive, the mood is swiftly lightened by a comic interlude involving Tonto and Silver that feels out-of-place in light of what you’ve just seen. 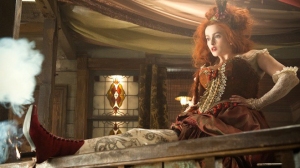 It’s a problem that blighted Verbinski’s Pirates… sequels, especially At World’s End (still the most expensive movie ever made), which couldn’t decide what type of film it wanted to be. A reason for this is the presence of Depp, a gifted comic actor whose iconic Jack Sparrow became the foundation on which the Pirates… series was built. Inherently a comic character, Sparrow and the film’s serious storylines created an imbalance (not helped by Depp’s increasingly self-indulgent performances) and it’s an issue that affects The Lone Ranger.

Depp is terrific as Tonto, channeling Buster Keaton in both his mannerisms and physical performance, not least in the film’s impressively staged final set piece on board a train (bringing to mind Keaton’s The General). If this were a film solely about Tonto and his quest for justice I would be the first in line, but once again Verbinski tries too hard by weaving the Native American around an unengaging plot involving Reid (to be fair to Hammer he’s pretty decent in the title role, but doesn’t stand a chance next to Depp). Verbinski got the balance right with Rango and, as such, produced his most successful and satisfying film to date.

In what must be his umpteenth film this year, composer Hans Zimmer shows here why he’s one of the very best in the business, delivering a soundtrack that gallops along and brings to mind the Saturday morning TV serials the Lone Ranger previously appeared in. Needless to say, Rossini’s William Tell Overture (used as the theme song in the TV show) brings a smile to the face when it’s finally used in the film’s closing moments. 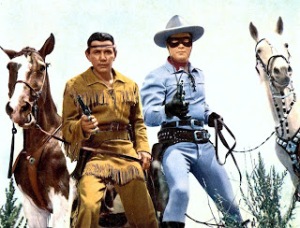 Fichtner delivers a typically great performance as the loathsome Cavendish, as does Wilkinson whose railroad tycoon Latham Cole is the sort of role he delivers in his sleep. Helena Bonham-Carter is wasted, however, as ivory-legged brothel owner Red Harrington, who gets too little screen time to make an impact, while British actress Ruth Wilson fares little better as Reid’s love interest Rebecca.

The Lone Ranger wouldn’t be a western if it didn’t tip its pearly white hat to John Ford and does so by filming in the iconic Monument Valley. Cinematographer Bojan Bazelli, whose previous credits haven’t been great (last year’s Rock Of Ages being one example) excels himself here with a number of stunning location shots.

Better than some knife-wielding critics would have you believe, The Lone Ranger still feels like a missed opportunity to reinvigorate a dying genre for a modern blockbuster audience.