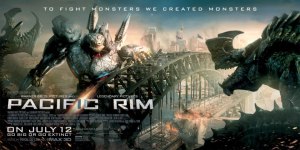 Best known until now for modern Spanish-language horror-fantasy classics Pan’s Labyrinth and The Devil’s Backbone, as well as his two Hellboy films, del Toro has taken a (literal) giant step up with Pacific Rim.

Pacific Rim has a long tradition of giant monster films in its wake and owes a tremendous debt to both legendary creature effects wizard Ray Harryhausen and iconic Japanese film director Ishirō Honda, whose 1954 classic Godzilla was the most influential monster movie since King Kong (1933).

Godzilla launched the Kaiju (“giant monster”) genre, which exploded in popularity in its native Japan and led to a slew of creature features, each more bonkers than the last. Rather a point of reference than a direct homage, Pacific Rim‘s giant bad guys are referred to as Kaiju, invading aliens from an underwater portal between dimensions that have only one thing on their mind – to take over the planet.

Faced with annihilation, mankind works together to build a series of 25 storey-high fighting machines called Jaegers (“hunters”), whose human pilots must share a mind link called The Drift in order to become one with the giant mechas. 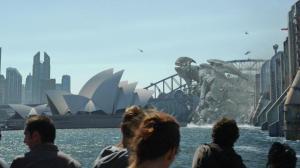 A Kaiju goes to work on Sydney, in Pacific Rim

Del Toro and Travis Beacham’s script ain’t much interested in the human characters; their back stories are perfunctory, or in some cases non-existent, and they trade-off with each other using the sort of dialogue that’s only ever found in special effects-laden summer blockbusters.

The cast is also predominately made up of familiar TV faces (mostly British), including Charlie Hunnam (Sons Of Anarchy) as Raleigh Becket, a gifted Jaeger pilot who’s lost his way since a tragic stand-off against a Kaiju (think Tom Cruise from Top Gun); Idris Elba (The Wire, Luthor) as tough, but fair Jaeger force commander Stacker Pentecost (who gets to utter the class line: “Today, we are cancelling the apocalypse!”); and Robert Kazinsky, who until now is best known for appearing in British soap EastEnders and here plays arrogant Australian Jaeger pilot Chuck Hansen. 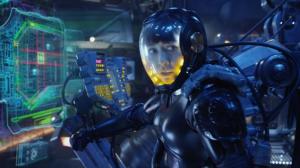 In a film with delusions of grandeur, the paper-thin characterisation (with the exception of Rinko Kikuchi’s wannabe Jaeger pilot Mako Mori) and stilted dialogue would be too much of an issue, but what saves Pacific Rim is its self-awareness. Lest we forget, this is a film about enormous man-made robots laying into massive alien lizards; characterisation and dialogue doesn’t really matter when you’ve got that sort of spectacle on screen. The squabbling interplay between the chalk and cheese scientists Dr Newton Geiszler (Charlie Day) and Dr Hermann Gottlieb (Burn Gorman) is so heightened as to be cartoonish, but that’s exactly what del Toro is going for. 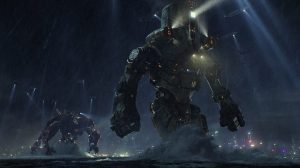 The Jaegers go to war in Pacific Rim

That’s not to say the film is completely devoid of any depth (pun intended). While the creature Godzilla represented the unforeseen consequences of the Atomic Age, the Kaiju in Pacific Rim have only made it to our planet due to the effects of global warming on our oceans. 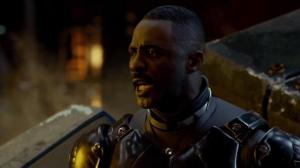 The special effects themselves are nothing less than jaw-dropping. When the Kaiju first attack in the lengthy, exposition-heavy pre-title sequence it’s a moment that will have you sat bolt upright in your seat. Bringing to mind Cloverfield (rather than 1998’s forgettable Hollywood remake of Godzilla), there’s nothing quite like watching a giant lizard tearing into a bridge.

The fact that it’s robots vs lizards certainly helps when it comes to working out who’s hitting whom. While Bay isn’t interested in whether you can follow which Decepticon is hitting which Autobot, del Toro keeps the action well-defined and, most importantly, epic in scale. The big problem with another of this summer’s tent pole movies, Man Of Steel, came in its final act where loud noises and mass destruction did not equal nose-bleeding entertainment; here the noise is deafening and the destruction is ultra-massive, but the difference comes in the fact you actually care about what’s happening and, in my case anyway, love every moment.

Leave your cynicism at the door and let Pacific Rim reward you with two hours of monster mayhem that’ll pulverise your senses.