For a franchise so long in the tooth, Fast & Furious is still firing on all nitrous-fuelled cylinders and showing no signs of slowing down as it shifts into sixth gear.

Fast & Furious 6 is unbelievable, ludicrous (or Ludacris) and absurd, but when brainless full-throttle action entertainment is done as effortlessly well as this it hardly matters

Although no slouch at the box office, 2009’s Fast & Furious accelerated the downward critical spiral of a series that had become weighed down by its underground car-racing roots. Realising the franchise needed a major jump-start, returning director Justin Lin and writer Chris Morgan expanded their horizons and delivered the most successful entry to date in 2011’s Fast Five.

Essentially Ocean’s Eleven on wheels, Fast Five managed to attract a whole new audience while still keeping the core fan base happy with plenty of turbo-charged vehicles.  Thankfully, Fast & Furious 6 is far from the car wreck that Ocean’s Twelve turned out to be; instead we get a high-octane joy ride that revels in its crazy stunts but doesn’t take itself too seriously. 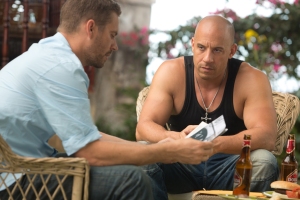 After pulling off the heist of their lives, Dominic Toretto (Vin Diesel), Brian O’Conner (Paul Walker) and the rest of the A-Team are enjoying the spoils. That is until Diplomatic Security Service agent Luke Hobbs (Dwayne Johnson) turns up unannounced offering to clear their criminal records in return for bringing down a highly professional and deadly gang of mercenaries led by criminal mastermind Owen Shaw (Luke Evans), whose second-in-command is Toretto’s presumed-dead lover Letty (Michelle Rodriguez). 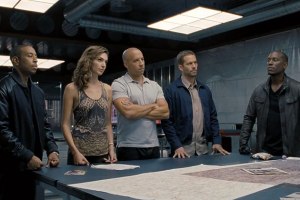 One of the things that really worked in Fast Five was the addition of man mountain Johnson to the cast, a far better actor than he’s given credit for as well as an imposing screen presence. We not only get Johnson back for Fast & Furious 6, we also get the ‘face of women’s MMA’ Gina Carano, who proved her chops in Steven Soderbergh’s under-appreciated 2011 action flick Haywire and stars here as Hobbs’ right-hand woman Riley. With so many bad-asses on screen it wouldn’t have taken much for the film to become one long (and ridiculous) fist fight; however, the narrative, much of which takes place in London, and characters are more than engaging enough for the fito work. 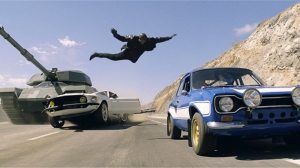 That’s not to say it’s shy when it comes to action, which is both fast and furious. The fight scene between Riley and Letty in a London Underground station is one of the best you’ll see this or any other year, while the demolition derby involving Shaw and Letty in a tank and Toretto, O’Conner, Roman Pearce (Tyrese Gibson) in souped-up motors trying to stop his dastardly plans is utter lunacy. Although it can’t match that other epic highway wig out in The Matrix Reloaded for sheer over-the-top spectacle, it’s still jaw-dropping stuff (although the lack of interest given to the civilian casualties along the way is somewhat troubling). Likewise, the final stunt-filled set piece staged on what must be the longest runway in the world doesn’t reach the heights of Fast Five‘s joyously pleasurable denouement involving a bank vault being dragged through the streets of Rio, but it’s another fine example of how every penny spared is on screen.

Diesel (who now looks set to stay after realising this is his best bet at a regular pay cheque) is hardly the world’s greatest actor, but then he doesn’t need to be to play lunkhead Toretto. The same goes for Walker, although there’s no denying they work well off each other and with the other members of the ‘family’ (as we’re constantly reminded), tech whiz Tej (Chris Bridges, aka rapper Ludacris), street racer Han (Sung Kang) and former Mossad agent Gisele (Gal Gadot). It’s also good to see the return of a few old faces, including Shea Whigham as O’Conner’s former FBI colleague Agent Stasiak.

The post-credits coda is becoming one of the franchise’s staples and this time delivers its most dramatic final twist yet, promising a great villain for next year’s follow-up. That being said, neither Johnson nor director Lin have signed up for Fast Seven due to it being rushed into production which is a big shame.

It’s unbelievable, ludicrous (or Ludacris), absurd and if you had a drink for every time someone changes gear you’d be slaughtered half an hour in, but when brainless full-throttle action entertainment is done as effortlessly well as this it hardly matters.