This review forms part of the IMDB Top 250 Films project on the excellent Head in a Vice site. If you haven’t already, make sure to check out the site, it really is very good.

Every once in a while a film comes along that generates a more fervent reaction among those who haven’t seen it compared to those who have.

David Cronenberg’s Crash was hugely controversial on its 1996 release, leading to some councils banning it from being shown, while the furore dredged up by the slew of so-called ‘video nasties’ led to stricter censorship laws being adopted in the UK.

A similar outcry greeted the release of Monty Python’s Life of Brian in 1979. Branded ‘satanic’ and ‘blasphemous’ in the United States, almost exclusively by those who had only heard what the film was about through Chinese whispers, the film generated an equally vitriolic reaction in the British media, among certain religious groups and rent-a-quote social campaigners such as Mary Whitehouse.

“Squatters!” Members of the People’s Front of Judea put the world to rights in Life of Brian

Most (in)famously, Python’s own John Cleese and Michael Palin staunchly defended the film on the BBC against the juvenile and contrary jibes peddled by Christian broadcaster Malcolm Muggeridge and the flamboyant Bishop of Southwark, Mervyn Stockwood.

The simple fact is that, almost 35 years on from its original release, Life of Brian remains the most insightful and satirical film ever made about religious dogma, as well as one of the funniest movies in cinema history.

As the title suggests, the film follows the life of Brian Cohen, a simple Jewish man who happens to be born in the stable next to Jesus Christ. Brian falls in love, joins the People’s Front of Judea, is temporarily picked up by an alien spaceship and is mistaken for the messiah on his way to a very musical end. 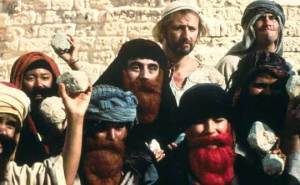 Brian at the ‘men’ only stoning in Life of Brian

Upon the release of the comedy troupe’s previous feature Monty Python and the Holy Grail in 1975, a journalist reportedly asked Eric Idle what their next film would be, to which Idle replied “Jesus Christ – Lust For Glory”. The Pythons ultimately decided not to cheapen the image of God’s only child (Hollywood epics had been doing that for decades); instead they took the far cleverer approach of using their singularly left field style to subvert many of the clichés we have of that time and point the finger at those who practice religious intolerance.

Right from the off it is made patently clear this is not a film about Christ. The first scene sees the Three Wise Men enter the manger where Brian has just been born, believing him to be the messiah, only to realise a few moments later they’ve gone to the wrong stable. The next scene picks up in AD33 with Jesus giving the Sermon on the Mount, only to pan to the back of the crowd where someone shouts “speak up!”, while a group behind bicker among themselves over what they think they’re hearing (“I think he said blessed are the cheese makers”) and call each other names.

This misinterpretation of religion – and the dangers that can ensue – is central to Life of Brian, none more so than in the hilarious scene when Brian unwittingly creates a movement and attracts a legion of followers who attach their own nonsensical symbolism to everything he does or says. A lost sandal is interpreted as a sign that all must cast off their shoes, while a blind man declares he has been given back his sight … shortly before plunging head first into a hole.

Indeed, when an exasperated Brian shouts “I’m not the messiah!”, one follower replies in all seriousness: “I say you are Lord, and I should know I’ve followed a few.” 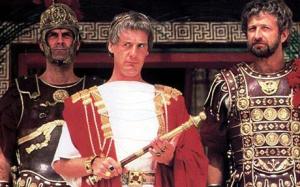 This inspired deconstruction of the delusionary influence of religious dogma is soon followed by an equally brilliant scene when Brian opens his window to be met by hundreds of his ‘followers’:

The Pythons also take aim at the talking shop politics of old-school socialists/communists/trade unionists who like the sound of their own voice too much to do anything constructive, encapsulated in the People’s Front of Judea, who brand fellow Roman-haters the Judean People’s Front and the Judean Popular People’s Front “splitters” and call for a meeting instead of action following Brian’s arrest.

The swipes don’t stop there. Public schools and the British gentrified classes both get sent-up, while the appearance of the alien spacecraft could be seen as the only direct example of religion-bating. As their TV show so often proved, the Pythons aren’t below the odd spot of low-brow humour either, be it Pontius Pilates’s ridiculously over-the-top lisp (“I shall welease Woger!”) or the character of Biggus Dickus.

In the end, Brian is encapsulated by his wildly overbearing mother as “not the messiah. He’s a very naughty boy!”. It’s a very silly line from an equally silly film that somehow manages to walk the tight rope between respect and out-and-out satire, and in doing so cements its position as one of the very greatest screen comedies.