“Life’s a bitch and then you die,” said Bertolt Brecht (sort of) in his musical The Threepenny Opera and it’s a pithy label often pinned on the work of Austrian filmmaker Michael Haneke. 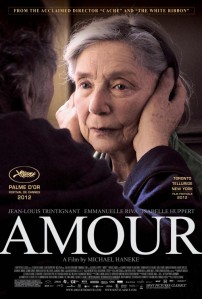 Amour – “a film for the ages, one that will bring with it fresh meanings and insights into life with each viewing”

Haneke is probably the most effective exponent of slow, claustrophobic, dread-filled cinema at work today and his protaganists invariably have pain and suffering thrust upon them, sometimes self-inflicted (Caché, The Piano Teacher), but more often not (Funny Games, Code Unknown, Time of the Wolf).

His previous film The White Ribbon portrayed a German community collapsing in on itself and earned the director the Palme d’Or at Cannes in 2009, a feat he repeated last year with his latest Amour (Love).

The title raised some eyebrows when it was first announced as cinephiles aware of Haneke’s previous output wondered whether he had gone soft in his old age.

This is a love story, but like none that have gone before it. Compared to the sentimentalised and unrealistic romances of Hollywood, Haneke’s unvarnished honesty may be distressing to watch, but its frank depiction of one elderly couple’s slow, unwinnable battle against the rising tide of chronic ill health and old age sets it out as one of the greatest and most essential films about love and death ever made. 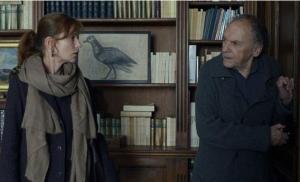 This story of love begins at the end, with the body of Anne (Emmanuelle Riva) discovered on her deathbed by firefighters called because she and her husband Georges (Jean-Louis Trintignant) have not been heard from for several days. It’s an image equal parts beautiful and morbid and remains in the mind as the film travels back to show how she came to rest.

Georges first observes there’s something wrong with his beloved wife Anne when, sat at the kitchen table she suddenly goes into a trance. When she snaps out of it several minutes later she reacts as if nothing’s happened. Soon after she suffers a stroke, an unsuccessful surgery and then another, more devastating stroke that leaves her partially paralysed. As Anne’s physical state degrades she also succombs to the ravages of dementia. 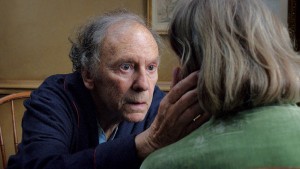 Jean-Louis Trintignant as Georges in Amour

No spring chicken himself, Georges promises Anne “no hospitals” and vows to take care of her himself. In spite of his obvious devotion to his wife, the physical and mental toll it takes on Georges is palpable. He knows he’s fighting a losing battle and Anne’s slow decline from feisty spiritedness to a child-like helplessness is both painful and exhausting, to the extent that in one shocking scene his patience finally evaporates when she refuses to eat and he slaps her across the face. 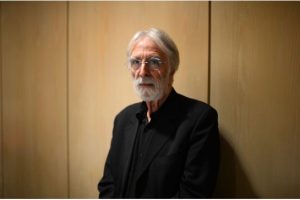 A chamber piece in every sense, Amour features a stunning cast. Trintignant’s refusal to turn on the waterworks or to curry sympathy is exactly what makes him sympathetic in a role he totally inhabits. Riva gives a performance of outstanding physicality and her heart-breaking transformation is a master class in restraint.

The apartment, once filled with joy and music (Georges and Anne are music teachers) gradually takes on the feel of a prison. A pigeon flies in, possibly representing a freedom neither will ever know again, and what follows is a scene both comical and incredibly sad as the decrepit Georges tries to capture it.

Haneke’s black humour is also present near the start of the film when the couple discover burglars have attempted to break in while they were out. Anne’s observation: “Imagine if we were lying in bed and somebody broke in … I think I would die of fright” is starkly ironic bearing in mind we know that firefighters will break into their apartment and discover her body on the bed.

Amour is a tough and often painful watch but there are many, many moments of beauty to be found here too. It’s a film for the ages, one that will bring with it fresh meanings and insights into life with each viewing.